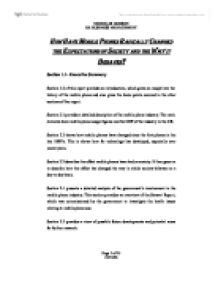 How Have Mobile Phones Radically Changed the Expectations of Society and the Way it Behaves ?

How Have Mobile Phones Radically Changed the Expectations of Society and the Way it Behaves? Section 1.1- Executive Summery Section 1.2 of this report provides an introduction, which gives an insight into the history of the mobile phone and also gives the basic points covered in the other sections of this report. Section 2.1 provides a detailed description of the mobile phone industry. The main elements been mobile phone usage figures and the GDP of the industry in the UK. Section 2.2 shows how mobile phones have changed since the first phones in the late 1980's. This is shows how far technology has developed, especially over recent years. Section 2.3 describes the effect mobile phones have had on society. It then goes on to describe how this effect has changed the way in which society behaves on a day-to-day basis. Section 2.4 presents a detailed analysis of the government's involvement in the mobile phone industry. This section provides an overview of the Stewart Report, which was commissioned by the government to investigate the health issues relating to mobile phone use. Section 2.5 provides a view of possible future developments and potential areas for further research. Section 3.1 gives the overall conclusions of this report. Section 1.2-Introduction 1.21. Alexander Graham Bell made the first ever telephone call in 1876, but it was not until 1912 when the first commercial telephone calls were made in the UK. In 1979, the first cellular phone system was developed and deployed in Japan using the idea of "low-powered two-way radios - converting human voice and data messages into radio waves" (source: http://www.bbc.co.uk/ science/hottopics/mobilephones/index.shtml). "On New Years Day 1985, Ernie Wise made Britain's first cell phone call on national TV on the Morecambe and Wise show" (source: http://www.guardian.co. uk). These cost approximately �400 and only worked in four areas in the UK, with a maximum range of approximately 50 miles. ...read more.

People can also send picture messages that can be cheaper than buying film and having them developed or cheaper than the cost of ink if using a digital camera. Mobile phones have therefore made a shrinking world even smaller than before in terms of communications. 2.32. Some people have mobiles now and use them instead of having a landline number, this is because it is cheaper to have one phone than two, and people always know what number to contact you on and so they are more likely to get in the contact immediately with the person they want. 8 percent of households in the UK are now mobile only households (no landline). 2.33. Mobile phones have saved lives on many occasions because it has allowed people to call for the emergency services without having to find a payphone/ landline phone. The time saved by this can on many occasions have been the difference between life and death for an injured person. 2.34. Police and Law Enforcement Agencies have used mobile phones to solve crimes. They can use signals and calls made from that phone to trace missing people or to find out where dead people had been (as in the case of the Soham murders). Phone signals can also lead police to people that are wanted and stop crimes before they happen (for example, Israel can stop Palestinians terrorists before they can deliver a car b**b into Israel). Some people think this is 'Big Brother' gone mad and an invasion of the civil liberty of free speech, as key words are sometimes listened for in phone conversations. Although, on the other hand mobile phones can be a major problem for police services because drivers using mobile phones whilst on the roads, they are more likely lose their concentration on the road and have an accident, possibly resulting in the death of the driver, other road users or pedestrians. ...read more.

phone technology and since the launch of the improved 2.5G in 2001, many people think that demand for 3G phones which have just been launched in the UK. "Third Generation (3G) mobile phones are about to revolutionize the way we use mobiles. 3G phones will provide multimedia applications from the mobile, including pager facilities, high speed internet access and digital voice reproduction and full motion video combined, thereby offering a significant advance on current technology" (source: Principles of Marketing. Bassington, F & Pettitt S. P382). The success of 3G phones are reliant of mobile users wanting to upgrade to faster and more flexible phones, however speed is not essential to the majority of mobile users and so 3G phones had lost their edge to 2.5G phones even before they were launched. If 3G phones are going to succeed, mobile phone companies must make sure that 3G really does make life more flexible and time efficient so it compliments the lifestyles of people today. If 3G technology is successful then I think mobile phone companies will look to move on to even better 4G technology. Section 3.1- Conclusion 3.11. Mobile phones have radically changed the expectations of society because it has made people easier and quicker to contact. Although with this comes an expectation of crime, both in terms of mobile phone theft and in accidents caused by drivers using mobile phones whilst at the wheel, but more expectations are been put on mobile phones in the fight against crime. 3.12. Mobile phone technology is also changing everyday and so mobile phones are going to continue to improve by becoming smaller, quicker and with better features. This is to be helped by the recent launch of 3G phones (that is if they are a success in the market place and there is enough demand for them). 3.13. Consumers will continue to demand more, but be willing to pay relatively less, whatever the technology, so it is essential for mobile phone companies to continue developing their products (through R'n'D) and selling them cheaper than ever before. ...read more.