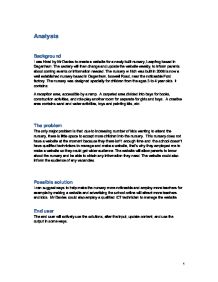 I was hired by Mr Davies to create a website for a newly built nursery, Leapfrog based in Dagenham. The sectary will then change and update the website weekly, to inform parents about coming events or information needed.

Analysis Background I was hired by Mr Davies to create a website for a newly built nursery, Leapfrog based in Dagenham. The sectary will then change and update the website weekly, to inform parents about coming events or information needed. The nursery which was built in 2008 is now a well established nursery based in Dagenham, boxwell Road, near the noticeable Ford factory. The nursery was designed specially for children from the ages 3 to 4 year olds. It contains: A reception area, accessible by a ramp. A carpeted area divided into bays for books, construction activities, and role play another room for separate for girls and boys. A creative area contains sand and water activities, toys and painting kits, etc. The problem The only major problem is that due to increasing number of kids wanting to attend the nursery, there is little space to accept more children into the nursery. This nursery does not have a website at the moment because they there isn't enough time and the school doesn't have qualified technicians to manage and make a website, that's why they employed me to make a website so they could get wider audience. The website will allow parents to know about the nursery and be able to obtain any information they need. The website could also inform the audience of any vacancies. Possible solution I can suggest ways to help make the nursery more noticeable and employ more teachers for example by making a website and advertising the school online will attract more teachers and kids. ...read more.

Screenshot after spelling corrected The "addEditCampaignDetails_exit" marco opened and closed the form. Test 3: Add/Edit Customers details in Wants Record 1: A new record was added and saved correctly Record 2: When I tried to enter a wrong data (letters in the Prop field), the system detected it, and the validation rule came up. Its shown in the screenshot below. Record 3: The "Accepted" boxes yes/no didn't work. To fix the problem I edited properties , after I changed the data type to yes/no like shown in the screenshot below. Edit Record 2: When I edited the "Prop data" in record 2, the cells allow me to edit dates and save them as shown below of the Wants table: "Add/EditWants_Exit", marco opened and closed the correct forms as expected. Test 4: Command buttons in the user interfaces Frm company interface The frmCompany loaded as expected All my command buttons in "frmCompany" worked and carried out all tasks as I expected. When manually clicked Interface of frmCampaign All the command buttons in "frmWantsCampaign" worked and carried out all tasks as expected. When click manually clicked. Test 5: Add/edit Wants and campaign Record 1 When editing Wants and Campaign a new record is added Record 2 When adding a text which is not recognised by the system 'Microsoft Access' detected it and a validation message appeared. Test 6: Queries I ran all queries and they run smoothly. Below is a screen shot of some of my queries. ?? ?? ?? ?? 1 ...read more.