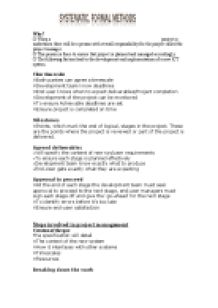 ï»¿Why? Ò When a project is undertaken there will be a person with overall responsibility for the project called the project manager. Ò This person is there to ensure that project is planned and managed accordingly. Ò The following factors lead to the development and implementation of a new ICT system. Clear time scales âBoth parties can agree a timescale âDevelopment team know deadlines âEnd user knows when to expect deliverables/Project completion âDevelopment of the project can be monitored âTo ensure Achievable deadlines are set âEnsure project is completed on time Milestones âPoints, which mark the end of logical, stages in the project. These are the points where the project is reviewed or part of the project is delivered. Agreed deliverables âWill specify the content of new sys/user requirements âTo ensure each stage is planned effectively âDevelopment team know exactly what to produce âEnd-User gets exactly what they are expecting Approval to proceed âAt the end of each stage the development team must seek approval to proceed to the next stage, end-user managers must sign each stage off and give the ‘go-ahead’ for the next stage âTo identify errors before it’s too late âEnsure end-user satisfaction Steps involved in project management Creation of the spec The specification will detail âThe context of the new system âHow it interfaces with other systems âTimescales âResources Breaking down the work âBreaking the project into a series of simpler tasks, which makes it easier to understand. ...read more.

âThere are 4 methods of changing over; +Direct +Parallel +Phased +Pilot Direct âThis is scrapping the old system and replacing it immediately with the new system. It is usually not a good idea as there is a risk of something going wrong. âFor some systems, it is the only method and if this is the case then it is done at the quietest time. Parallel âBoth the old and the new systems are run together for a certain time. When the new system is established and running smoothly, the old system is scrapped. âThis is a safe method as the old system is there for back up. âIt can be costly though as extra time is required to run both systems at once and can lead to confusion. Phased âThe changeover occurs in stages. âCan only be used for large systems that can be broken down into separate sections. Pilot âThe system is implemented in one department or location before the rest of the organisation. âThis way any bugs can be cleared up and users reactions can be taken into account before the system is implemented. âTraining can be adapted in the light of experience. Review & Maintain âOnce a system is in full operation it is monitored to check the it has met the objectives set out in the original specification. ...read more.

âA preliminary design is created for the new system. This phase is the most important part of "Spiral Model". In this phase all possible (and available) alternatives, which can help in developing a cost effective project are analysed and strategies to use them are decided. This phase has been added specially in order to identify and resolve all the possible risks in the project development. If risks indicate any kind of uncertainty in requirements, prototyping may be used to proceed with the available data and find out possible solution in order to deal with the potential changes in the requirements. âA first prototype of the new system is constructed from the preliminary design. This is usually a scaled-down system, and represents an approximation of the characteristics of the final product. âA second prototype is evolved by a fourfold procedure: +evaluating the first prototype in terms of its strengths, weaknesses, and risks; +defining the requirements of the second prototype; +planning and designing the second prototype; +constructing and testing the second prototype. Advantages 1. Estimates (i.e. budget, schedule, etc.) become more realistic as work progresses, because important issues are discovered earlier. 2. It is more able to cope with the (nearly inevitable) changes that software development generally entails. 3. Software engineers (who can get restless with protracted design processes) can get their hands in and start working on a project earlier. Disadvantages 1. Highly customised limiting re-usability 2. Applied differently for each application 3. Risk of not meeting budget or schedule ...read more.