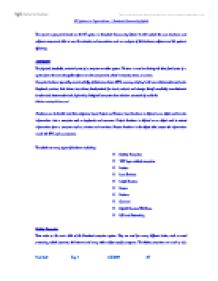 ICT Systems in Organisations - Broadoak Community School This report is going to be based on the ICT system in Broadoak Community School. It will include the main hardware and software components that we use, the networks and connections and an analysis of the hardware, software and the system's efficiency. HARDWARE The physical, touchable, material parts of a computer or other system. The term is used to distinguish these fixed parts of a system from the more changeable software or data components, which it executes, stores, or carries. Computer hardware typically consists chiefly of electronic devices (CPU, memory, display) with some electromechanical parts (keyboard, printer, disk drives, tape drives, loudspeakers) for input, output, and storage, though completely non-electronic (mechanical, electromechanical, hydraulic, biological) computers have also been conceived of and built. [Definition according to Dictionary.com] Hardware can be divided into three categories, Input, Output and Process. Input hardware is defined as an object used to enter information into a computer such as keyboards and scanners. Output hardware is defined as an object used to extract information from a computer such as printers and monitors. Process hardware is the objects that process the information inside the CPU such as processors. The school uses many types of hardware including: ? Desktop Computers ? 'IZZI' type notebook computers ? Laptops ? Laser Printers ? Inkjet Printers ? Servers ? Modems ? Scanners ? Digital Cameras/Web Cams ? ...read more.

They take an image and copy it into the computer, with the same purposes as a photocopier. With a scanner and the software included with it you can alter the picture and then print it off and/or save it onto the hard drive. The picture is taken by a series of light sensitive cells that pass over the image and the software then sorts the input from the cells into an intelligible picture. There are many different sizes of scanner, with many different purposes. Some scanners even allow you to scan text and then edit it on screen. Scanners are designed so that they do not harm the original copy. In school scanners are mainly used to import pictures for coursework or copies of accounts. NETWORKING The school uses three different types of network, a wireless LAN, a wired LAN and a WAN: the Internet. The IZZIs and the laptops are connected via the Samsung(tm) wireless network to the servers and eventually to the main office where electronic registers are checked using the SIMs software (a database that holds pupil addresses, telephone numbers and other information). Most of the desktops in the school are connected to the wired LAN so that students can save their work in the correct sector of the system. Wired LAN (Local Area Network) Most of the stations in Broadoak are connected to the wired LAN, which allows students to save work and to join printer queues. The scanners and digital camera images can be saved onto network folders. ...read more.

Microsoft(r) Word now has a built-in auto-save feature that automatically updates the save file whenever that computer is left idle. If the user has this feature turned off it sends a reminder to save your work at certain points. Viruses and Anti-virus Software Viruses are simply randomly destructive programs that are inserted into a computer usually via the Internet and e-mail. They replicate themselves very quickly and are sometimes very destructive. Some are also written just to annoy, for instance generating pop-ups whilst you are browsing the Internet. They are programmed to hide and conceal themselves so they are difficult to detect and destroy before serious damage is done. Anti-virus software attempts to seek and destroy viruses. Programs such as Norton AntiVirus automatically update themselves whenever the Internet is connected this helps them to know the names and positions of any new viruses. IN CONCLUSION In school the ICT system has had a huge amount of money invested in it and will have much more in future. The school system was expensive to set-up initially but, on the whole, runs very efficiently. Occasionally there are printer problems but this usually due to connectivity and the toner cartridges running out which is annoying if you need to print work. The 'Net Nanny' program that the school runs is generally quite good and only blocks pages with bad language or mobile ringtone sites. Also sites can be added manually to the 'black list'. It would be less feasible but useful if the students had some colour printing facilities. Students files are well protected by the user-name/password system. Matt Bull Page 1 5/6/2007 ICT ...read more.