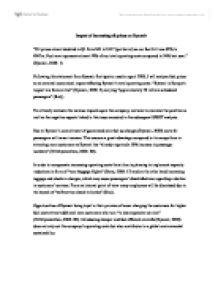 Impact of increasing oil prices on Ryanair "Oil prices almost doubled in Q1 from $61 to $117 (per barrel) as our fuel bill rose 93% to �367m. Fuel now represents almost 50% of our total operating costs compared to 36% last year." (Ryanair, 2008: 1) Following this statement from Ryanair first quarter results report 2009, I will analyze fuel prices as an external economical impact affecting Ryanair's total operating costs. "Ryanair is Europe's largest low fares airline" (Ryanair, 2008: 3) carrying "approximately 58 million scheduled passengers" (Ibid.). To critically evaluate the various impacts upon the company, we have to examine the positive as well as the negative aspects linked to this issue executed in the subsequent SWOT analysis. ...read more.

From an internal point of view many employees will be dismissed due to the launch of "self-service check-in kiosks" (Ibid.). Opportunities of Ryanair being loyal to their promise of never charging the customers for higher fuel costs attract additional new customers who turn "to less-expensive carriers" (Niththyananthan, 2008: B2). Introducing cheaper and fuel efficient aircrafts (Ryanair, 2008) does not only cut the company's operating costs but also contributes to a global environmental sustainability. Ryanair is planning to "continue to absorb higher oil costs, even if it means short-term losses" (Ryanair, 2008: 1). As stated in our opening quote from Ryanair (2008) fuel expenditures amount to 50% of the operating costs and according to various sources the average price of crude oil per barrel is expected to rise in 2009 for example, the Deutsche Bank forecasts the barrel price at $120 (Meyer, 2008). ...read more.

The only main difference resides in a positive future perspective from the company's point of view opposed to an inopportune outlook from the public media. Although Ryanair's CEO Michael O'Leary is very confident about his forecasts managing the operating costs, the global economic situation does not verify his actions. The airlines operating income increasing due to a higher number of customers is not a situation sustainable over a long-term because of the coherent decline in quality of service as mention above. From my personal perspective I think Ryanair is using a substantial marketing strategy intended for attracting customers in recession time of the travelling market. Yet, it is very perilous and can result in a bigger problem then assume. The information provided was up to date, very useful and sufficient to objectively evaluate the situations. ...read more.