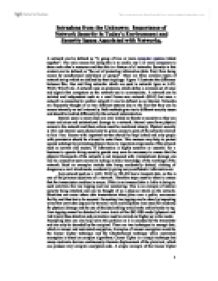 Intrusions from the Unknown: Importance of Network Security in Today's Environment and Security Issues Associated with Networks.

Intrusions from the Unknown: Importance of Network Security in Today's Environment and Security Issues Associated with Networks. A network can be defined as "A group of two or more computer systems linked together". The main reason for doing this is to enable any 2 or more computers to share each other's resources and thus this is a feature of all networks. Security in this context can be defined as "the act of protecting information (data files) from being access by unauthorised individuals or groups". There are three common types of network set up which are defined by there topology. Figure 1 illustrates the difference between Star, Bus and Ring networks which are used in network types as LAN, WAN, WLAN etc. A network runs on protocols, which define a common set of rules and signals that computers on the network use to communicate. A network can be isolated and independent such as a small home-area network (HAN) but once a network is connected to another network it can be defined as an Internet. Networks are frequently thought of as two different systems due to the fact that they can be access internally as well externally. Both methods give rise to different security issues and should be tackled differently by the network administration. Internal users in most cases are over looked as threats to security as they can cause malicious and unintentional damage to a network. Internal users have physical access to the network and there actions must be monitored closely. Physical security is vital and internal users should only be given access to parts of the network relevant to him / her. Rooms with important servers should be kept locked and only people with permission should be allowed to enter them. This measure may help to protect against sabotage by preventing physical harm to important components of the network such as servers and routers. ...read more.

Proxy servers differ from firewalls because they can control how internal users access the outside world also they can block all outside connections and only allows internal users to access the Internet. Proxy services run at the application level of the network as figure 3 illustrates. Proxy servers run on protocols such as HTTP, FTP, Telnet etc and thus must be updated when new protocol comes into existence. One key aspect of firewalls is that the software used to run them must always be updated as new holes in security are found by hackers and thus must be sealed. If a firewall is to be effective, monitoring and maintenance must be carried out on a regular basis. A denial of service (DoS) attack is an incident in which a user or organisation is deprived of the services or a resource they would normally expect to have. The network / server is flooded with a continuous stream of bogus requests such as a HTTP server constantly being asked for web pages. Usually a denial of service attack can sometimes happen accidentally such as to many users trying to view a popular website. Such an attack is a type of security breach to a computer system that does not normally result in the theft of information or other security loss however data can be lost. Attacks of this nature can cost the company a great deal of time and money as the service could be brought down for several hours. In terms of prevention there are only a few measures which can be taken to protect a network from a DoS. Checking to see if unauthorised / unknown changes have been made to the file system, registry, user account database, etc. This will ensure that if some area of the system has been changed firstly you know someone is interfering and secondly you can take the necessary steps to prevent access to the network in the future. ...read more.

In conclusion it is clear to see that there are many issues associated with network security and in order to fully protect a network nothing can be left to chance. If the topology of a network is studied it will reveal how the network is made up of many separate components, which work together to form the network. Every aspect of the network should be looked as part of a whole system. Whether this is actually achieved depends on a businesses network security policy. Every organisation, which has a network, must ensure that its network security policy is adequate to deal with the majority of risks posed by a network. When determining a network security policy an organisation must ask its self four key questions. Firstly all resources that need to be protected must be identified. Secondly identify which people need to protect the networks resources from. Thirdly how likely are these threats going to occur which can help determine what prevention methods should be put in it place. Lastly what measures would best protect the network while taking into account cost and time management. It is of up most importance for an organisation to have well defined network policy, which can help ensure that the safety of the network is not compromised. In summary networks are forever subject to internal and external change and with those changes come new dangerous to security. The best tool available to protect a network is extensive knowledge of ones own network and of the eternal environment in which the network operates. Figure 1: Different types of network topology The above diagram helps to show that there are many ways to set up a network therefore many ways in which networks can be protected. There is no one set way to protect any network. Figure 2: A firewall connected to a DMZ LAN Figure 3: Proxy / Firewall Figure 4: Distributed Denial of Service Attack. Please note the term computer is used loosely as it could be a server / network etc. Represent the flow of data (such as data packets) Figure 5: Start 1 ...read more.