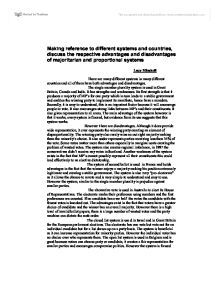 Making reference to different systems and countries, discuss the respective advantages and disadvantages of majoritarian and proportional systems

Making reference to different systems and countries, discuss the respective advantages and disadvantages of majoritarian and proportional systems Lucy Minshall There are many different systems in many different countries and all of them have both advantages and disadvantages. The single member plurality system is used in Great Britain, Canada and India. It has strengths and weaknesses. Its first strength is that it produces a majority of MP's for one party which in turn leads to a stable government and enables the winning party to implement its manifesto, hence have a mandate. Secondly, it is easy to understand, this is an important factor because it will encourage people to vote. It also encourages strong links between MP's and their constituents. It also gives representation to all areas. The main advantage of the system however is that it works, every system is floored, but evidence from its use suggests that this system works. ...read more.

However the system, similar to the single member plurality is prejudice against smaller parties. The alternative vote is used in Australia to elect its House of Representatives. The electorate marks their preference using numbers and the first preferences are counted. If no candidate has over half the votes the candidate with the fewest votes is knocked out. The advantages exist in the fact that voters have a greater choice of candidate and the winner has an overall majority. However there is a high level of invalid ballot papers, there is a large number of wasted votes and the party machine can dictate the rank order. The closed list system is used in Israel and in Great Britain for the European parliament elections. The electorate has one vote but vote not for an individual candidate but for a list drawn up on a party basis. ...read more.

There are disadvantages though because the constituency vote favours big parties but third parties are given a key role in the formation of government. The single transferable vote(STV) is used to elect the Australian senate and in the Republic of Ireland. Voters express preferences in numerical order, then to be elected a candidate must reach a quota calculated by dividing the number of votes by the number of representatives needed plus 1. If no-one reaches the quota then the bottom candidate is eliminated. Its advantages exist in the fact that the system is proportional, it maintains good MP constituency links, voters can choose candidates not parties, it facilitates minority representation and there are no wasted votes. There are disadvantages though because it takes a long time to for the results and there is an element of chance in the final result. ...read more.