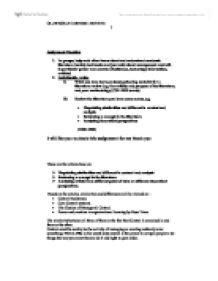 Organisations may have measurements without formal planning or even without any system for profane assessment. Third degree control consists of operations with any additional two elements. Fourth degree control consists of the four basic elements of the core control system planning, operations, measurement and evaluation reward. This conceptualisation is helpful in understanding the advantages and disadvantages of control systems, also guide so there evaluation and design Also is the Illusion of Managerial control. It results from the manager believing that their assumptions concerning measurability, communication and compliance are actually in use throughout an organisation. Critically it aids the belief among managers that the conventional controls such as operating standards, profit targets and budget and criteria accurately and validly measure and thereby determine behaviour. To those managing within this Illusion of control, negative results of managerial action often signify the necessity for more controls. Management is portrayed as the sole casual agent and the question of the degree to which " non-managerial" agents can really influence tends to be avoided. The functionality of the illusion of control is in many ways, regardless of how baseless the illusion of control may be from the perspective of Contemporary control theory. For example in some organisation the global vision presented by the senior management is only partially adhered to in any form throughout the organisation as a whole. ...read more.

The organisation is assumed to be made up of individuals, operating departments and staff groups, which are relatively homogeneous with regard to the basics they use to assess the achievements of their interest. The global vision is assumed to be the local vision. The assumption remains that a single vision exists and is appropriate to all parts of the organisation. This is the perspective known as "UNIRATIONALITY". In summary, and alternative definition of control is implementing control implies the ability to establish expectations, develop a plan for realisation; implement this plan and then maintain the desired state until change is deemed necessary. Being in control is the ability to prescribe and realise that, which is in the best interest of the controller, in this case an interest group. DIFFERENCES... The major difference between these articles is based on the fact that all of the articles have been viewed in different perspective, which already has been stated in the comparison and contrast from stating their similarities. REFERENCE Article 1 Control Resistance Article 2 Core Control systems. Accounting, Budgeting And Control Systems in Their Organisizationl Context: Theoretical And Empirical Perspective Eric G. Flamholtz Graduate School of Management University of California, Los Angels Article 3 The Illusion of Managerial Control J.D.Dermer and R.G. Lucas Faculty of Administrative Studies, York University, Toronto Article 4 Power and emotion in organizational learning by Russ Vince 1 Hyder (pronounced Her-der) is the Welsh word meaning 'confidence'. 2 Hyder PLC has provided permission to publish this case study. ...read more.