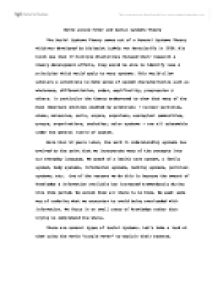 Movie Jungle Fever and Social Systems Theory The Social Systems Theory comes out of a General Systems Theory which was developed by biologist Ludwig von Bertalanffy in 1936. His hunch was that if multiple disciplines focused their research & theory development efforts, they would be able to identify laws & principles which would apply to many systems. This would allow scholars & scientists to make sense of system characteristics such as wholeness, differentiation, order, equifinality, progression & others. In particular the theory endeavored to show that many of the most important entities studied by scientists - nuclear particles, atoms, molecules, cells, organs, organisms, ecological communities, groups, organizations, societies, solar systems - are all subsumable under the general rubric of system. More than 50 years later, the work in understanding systems has evolved to the point that we incorporate many of the concepts into our everyday language. We speak of a health care system, a family system, body systems, information systems, banking systems, political systems, etc. One of the reasons we do this is because the amount of knowledge & information available has increased tremendously during this time period. ...read more.

The social system is always more complex than an individual, more open to environmental influence, more adaptive to circumstance because of collective experience & wider reservoir of skills. All systems have common elements. These are: input, output, throughput or process, feedback, control, environment, goal. The inputs of systems presented in "Jungle Fever" are information, energy, time, individual efforts which are aimed at the goal. The throughput is presented in thinking, planning, decision-making, sharing information, meeting in groups, discussing, etc. The output - decisions made by people, results of their activity, events which follow the decisions, actually their reaction to understanding of rules and restrictions of the society. The feedback - is information which our heroes get for consideration and analysis, everything new that may be used for some purposes, actually their knowledge of general moral and primary principles of the society. In my opinion all the micro and mezzo systems we see in the movie (the office department, the family, the couple, etc.) are the subsystems of a large social macro system. ...read more.

Social systems affect how, why, to and from whom, and with what effects communication occurs. Communication affects the social system and vice-versa. Neither can be analyzed separately without distorting the nature of the process. So, analyzing behavior of the couple we for sure should also consider behavior of their families, colleagues, friends, etc. In the ideal system, prescriptions, descriptions, and expectations about a given role all fit together. In most groups in the real world, though, they don't. If they differ radically, communication breakdowns occur within the system. When our expectations of a role don't match the performance of that role then there will be communication problems. Obviously, we operate simultaneously in a large number of systems. An individual occupies positions in each group, performs behaviors in each group. In addition to these groups, there are groups she would like to belong to. These groups serve as reference groups. Reference groups are the social systems that serve as reference points for the individual, groups whose norms and role behaviors are predictors of her own behavior and beliefs. In our case we observe communication problems arisen as a result of stereotyping. ?? ?? ?? ?? 1 ...read more.