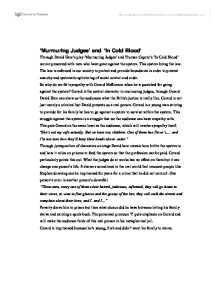 'Murmuring Judges' and 'In Cold Blood' Through David Hare's play 'Murmuring Judges' and Truman Capote's 'In Cold Blood' we are presented with men who have gone against the system. This system being the law. The law is enforced in our society to protect and provide boundaries in order to prevent anarchy and systematic splintering of social control and order. So why do we fell sympathy with Gerard McKinnon when he is punished for going against the system? Gerard is the central character in murmuring judges, through Gerard David Hare can show us the audiences what the British justice is really like. Gerard is not just merely a criminal but David presents us a real person. Gerard is a young man striving to provide for his family he has to go against a system to survive within the system. This struggle against the system is a struggle that we the audience can have empathy with. ...read more.

What every one needs is a lump of money. And the waves will be up to my chest." In Cold Blood shows this two as d**k and Perry were imprisoned by their situation in life and their family back round. d**k coming from a poor farming back round didn't want to end up slaving away just to be able to break even. Whereas in life Perry never really stood a chance as his mother was an alcoholic who killed herself leaving Perry to fend for himself in a children's home. d**k and Perry like Gerard are presented to the reader as human beings. Through out the story they make comments and do things that you wouldn't expect criminals to do. Perry is a key example of this. "A dictionary buff, a devotee of obscure words, he had been intent on improving his companion's grammar and expanding his vocabulary" Gerard appears like Perry to be highly educated and will make profound comments on the judicial system. ...read more.

Gerard is naive and innocent. "Don't you know the procedures haven't? you been in prison before?" "He is frowning at the out size to and trousers, while at the same time trying to stay decent" Both writers use there text as a platform to presents there ideas of the judicial system which we are as the viewers we sub consciously store away when we are deciding on what we think of the characters and how there are treated in society. d**k and Perry are strangers and outcasts in society eyes in Middle America. There both have no Jobs and have difficulty when they do hold a job down to stay put. They behave very much like nomad's and wonder around the country trying to find somewhere to fit in. d**k though always seems to have a sudden urge to return home. Perry and dicks story overtakes the clutter family and it cast aside what happened to the clutters and capote manages to make d**k and Perry our main primary thought. ...read more.