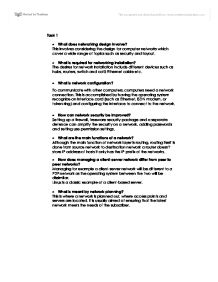 Task 1 * What does networking design involve? This involves considering the design for computer networks which cover a wide range of topics such as security and layout. * What is required for networking installation? The desires for network installation include different devices such as hubs, routers, switch and cat5 Ethernet cable etc. * What is network configuration? To communicate with other computers, computers need a network connection. This is accomplished by having the operating system recognize an interface card (such as Ethernet, ISDN modem, or token ring) and configuring the interface to connect to the network. * How can network security be improved? Setting up a firewall, freeware security package and a separate defence can amplify the security on a network, adding passwords and setting use permission settings. * What are the main functions of a network? Although the main function of network layer is routing, routing itself is done from source network to destination network a router doesn't store IP address of hosts it only has the IP prefix of the networks. * How does managing a client-server network differ from peer to peer networks? Managing for example a client-server network will be different to a P2P network as the operating system between the two will be dissimilar. ...read more.

These features include more harsh specifications for crosstalk and system noise. This also provides performance of up to 250MHz and is suitable for a faster type of Ethernet such as 10BASE-T. The latest standard was announced in February 2008 named Category 6a or Augmented Category 6 and has defined at frequencies up to 500MHz double the velocity of its predecessor. The length regulated stands at 100 metres for the Cat6 cable. 90 metres of which should be horizontal. Fibre optic cable is used to carry signals for broadband, TV and voice. Made of very thin strands/threads of glass or plastic that can carry large amounts of digital information for long distances using light, fibre optic cables can carry a lot more data at one time than traditional copper wires. Fibre optic cables are reliable (they don't suffer from electromagnetic interference,) but they are expensive to install. Network Interface Cards A universal problem with NICs is a hardware fault; this is most likely caused by Electrostatic discharge. This usually is caused by incorrect handling of the hardware such as not using devices to protect against Electrostatic discharge e.g. Antistatic wrist bands, antistatic floor mats etc these can help protect Electrostatic discharge on electronic devices. The only way to diagnose this problem is to see if the hardware works or not, you may not even know you have damaged the device when handling it. ...read more.

Websites, documents and software can always be blocked out by the proxy servers. These are used to as a small layer of protection for the network. This should stop the potential employees for downloading any volatile software or programs. SNMP (Simple Network Management Protocol) configure This is a production standard for network management. SNMP is usually used by the managers of the network, this allows them to modify the network to suit their business needs. It gathers information about the performance of the software and hardware on the network which then is observed by the user to project how the network components are working. Any network can potentially suffer from performance problems. I will be studying 3 case studies for comparison reasons. A smaller home network with a couple of computers both connected together, a larger sized network which is a classroom inside my college and finally the large scale network which is my workplace of Alliance Boots. Speed is the most important factor. Network performance is key to success; if the network is down in any of these places then nothing will get done. There would be a massive delay in everything that would need to be completed. All these places would need to make certain that they can cope with higher speeds for a beneficial performance. There was a vast difference within the networks. The small network will usually be running a couple of computers at a time ...read more.

The majority of answers given do not reflect the questions posed. As an example, immediately in Task 1, the answer to the first question is too vague and shows lack of research. Network design essentially involves the hardware architecture and ...

The majority of answers given do not reflect the questions posed. As an example, immediately in Task 1, the answer to the first question is too vague and shows lack of research. Network design essentially involves the hardware architecture and network infrastructure of a business, consisting of at least the topology design, planning (through a variety of means which may even involve simulators such as Packet Tracer), associated costs etc. network design forms a core part of ERP. As for security, this is typically described in a business continuity plan.
A few other examples: In Task 2, the response to physical size affecting design shows a lack of understanding of computer networks, the response to security requirements neglects key examples of password encryption and good practice (e.g. alphanumerical, mixed case and symbols) and regular change. In Task 3, colour coding and types of cables (e.g. crossover, rollover, straight-through) is not mentioned in Network Cabling.
I would strongly recommend further research and to read the question carefully before answering.

The coursework is largely opinionated, contains very few examples and lacks any citations. The latter two should at least not have been the case considering that this is an A-Level piece of work. The student has however demonstrated a good level of understanding in the technical terms involved in networking.

Quality of writing - Is the writing accurate in terms of spelling, grammar and punctuation? Has the writer used technical terms expected at this level of qualification? To what extent does the writer follow conventions and expectations for written work at this level?
Minor grammar and punctuation mistakes are present throughout. The student presents this coursework as a very informal document which is evidenced through the style of writing and lack of even the most basic document administration (front page with short abstract, contents, bibliography, page numbers etc). Task 2 is informative yet let down by informal writing and repeating similar patterns as described above in Task 1 - the student shows a remarkable lack of understanding in network security, offering only vague answers to security requirements.
Overall, this coursework is not at an A-Level standard.