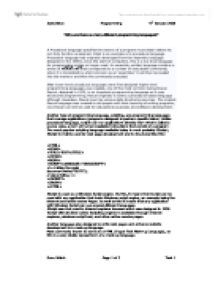 By this, it means that Jscript can be used with any application that hosts Windows script engine, an example being the internet and active server Pages. As well as this it means that any application with Windows Script can use several different languages. JScript was first used in internet explorer browser which was designed in 1996. Jscript with all other active Scripting engines is available through internet explorer, windows script host, and other active service pages. Another language also designed to write web pages and enhance website development is a mark-up language. Most commonly known to some as a HTML (Hyper Text Mark-up Language), as this is a very widely spread form of a mark-up language. ...read more.

A form of an OOP is java, similar to what we have previously covered in scripting languages. As you can tell java and Jscript are created by the same company, Sun Microsystems and created in 1995, Java was the first to be designed. Now moving on to visual languages; a visual language will allow users to specify programs by manipulating the program features graphically compared to textually. It displays visual expressions and graphic symbols. The majority of VPLs are based on "boxes and arrows," basically, a number of boxes or circles that are treated as screen objects, connected by arrows or lines. CODE is a type of VPL allowing users to create sequential programs into parallel ones. ?? ?? ?? ?? Joely Brice Programming 9th January 2008 Sunu Walsh Page 1 of 2 Task 1 ...read more.