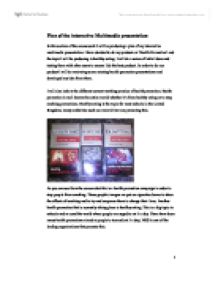 Plan of the interactive Multimedia presentation In this section of the coursework I will be producing a plan of my interactive multimedia presentation. I have decided to do my product on 'Health Promotion' and the topic I will be producing is healthy eating. I will do a series of initial ideas and testing them with other users to ensure I do the best product. In order to do my product I will be reviewing some existing health promotion presentations and developed my idea from there. I will also look at the different current working practice of health promotion. Health promotion is well known the entire world whether it's from healthy eating or to stop smoking promotions. Healthy eating is the topic for most schools in the United Kingdom; many celebrities such as Jamie Oliver are promoting this. As you can see from the screen shot this is a health promotion campaign in order to stop people from smoking. These graphic images are put on cigarettes boxes to show the effects of smoking and to try and empower them to change their lives. Another health promotion that is currently taking place is healthy eating. This is a big topic in schools and ar ound the world where people are urged to eat 5 a day. ...read more.

I used fireworks to create a star like drawing. Again I kept the same style of text, I used Photoshop to do this and I put the text in front of the picture which makes it stand out. A good point to this design is that the background shape makes the text stand out on the logo which I think is good. A bad point to this would be the dark colours. Logo Design 2 This is my second design I have done for my product. I experimented with different shapes till I found a good style that I liked. I used the colours red around the side's of the shape and white in the middle, also I used the initial's 'HP' which stands for health promotion. I like the use of having the initial's in the logo which I think I might use in my final design. Design 3 This is my third initial idea that I have done. Again I experimented with different shapes to see which one looks best and used different affects to create a style I used 'motion tails' to create a red shadow which I think is good. For the text I decided to but the 'health' on top and 'promotion' on bottom, also I used an 'arch' affect which looks good with the shape in the middle. Interaction: To make my multimedia product interactive I will be using a reality check that users could enter their data, in order to do this. ?? ?? ?? ?? 1 ...read more.