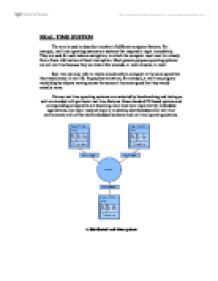 REAL TIME SYSTEM The term is used to describe a number of different computer features. For example, real-time operating systems are systems that respond to input immediately. They are used for such tasks as navigation, in which the computer must react to a steady flow of new information without interruption. Most general-purpose operating systems are not real-time because they can take a few seconds, or even minutes, to react. Real time can also refer to events simulated by a computer at the same speed that they would occur in real life. In graphics animation, for example, a real-time program would display objects moving across the screen at the same speed that they would actually move. Various real-time operating systems are evaluated by benchmarking and testing as well as extended with particular real-time features. Since standard PC-based systems and corresponding components are becoming more and more important for embedded applications, one major research topic is to develop distributed/parallel real-time environments with of-the-shelf embedded hardware and real-time operating systems. A distributed real-time system TYPES OF REAL-TIME SYSTEM 1. Hard real-time Systems where it is absolutely imperative that responses occur within the specified deadline. The properties of a hard real-time system are: 1. ...read more.

Real-time systems undergo constant maintenance and enhancements during their lifetimes. They must be extensible. Although real-time software often complex, features provided by real-time languages and environments enable these complex systems to broken down into smaller components, which can be managed effectively. 2. Manipulation of real number Many real-time systems involve the control of some engineering activity. A simple computerized controller Most controllers are implemented as computerized to prevent the complexity of the model, and the number of distinct (but not independent) input and output since linear first order equations are only an approximation to the actual characteristics of the system also presents complications. Items marked with a * are now discrete values; the sample and hold operations is carried out by an analog-to-digital converter, both converters being under the direct control of the computer. Within the computer, the differential equations can be solved by numerical techniques, although the algorithms themselves need to be adapted to take into account the fact that plant outputs are now being sampled. The implementation of this algorithm is, however, of direct concern. They can be mathematically complex and require a high degree of precision. A fundamental requirement of a real-time programming language therefore is the ability to manipulate real, fixed or floating-point numbers. ...read more.

on Monday to Friday due to families return back from work, turning all lights, cooking for dinner, etc. - for mode changes, in air flight control systems, all computing resources were needed to handling the emergency if an aeroplane has experienced depressurization. In order to meet response times, it is necessary for a system's behavior to be predictable. 6. Interaction with hardware interfaces The systems require the computer components to interact with the external world. They need to monitor sensors and control actuators for a wide variety of real-world devices and these devices interfaces to the computer via input and output registers, and their operational requirements are device and computer dependent. Because of the variety of devices and the time-critical nature of their associated interactions, their control must be often direct, and not through a layer of operation system functions. 7. Efficient implementation and the execution environment Since real time systems are time-critical, efficiency of implementation will be more important than in other systems. One of the main benefits of using a high level language is that it enables the programmer to abstract away from implementation details and to concentrate on solving the problem ant hand Example of real time system products. a) Real-Time Monitoring screen in Weather b) Time Recorder/Access Control c) Kontakt digital Appendix https://tagteamdbserver.mathworks.com/ttserverroot/Download/771_9400v02_RTWS4_DS.pdf ...read more.