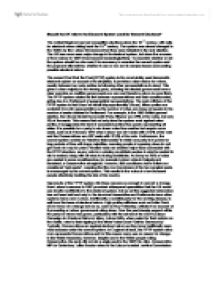 Should the UK reform the Electoral System used for General Elections?

Should the UK reform the Electoral System used for General Elections? The United Kingdom has had competitive elections since the 18th century, with calls for electoral reform dating back the 19th century. The system was almost changed in the 1930's by the Labour Government but they were defeated in the next election. The UK has never seen major change to its electoral system, but since the success of New Labour in 1997 it has become increasingly likely. To ascertain whether or not the system should be reformed, it is necessary to examine the current system and the proposed alternatives, whether in use or not, and to analyse issues surrounding possible electoral reform. The current First Past the Post (FPTP) system is the most widely used democratic electoral system on account of its simplicity. It provides a clear choice for voters, usually between two main parties but allowing other representatives to stand. This gives a clear majority to the winning party, meaning the elected government have a clear mandate so coalition governments are rare and therefore reform is more likely. The FPTP system retains the link between representatives and their constituencies, giving rise to a Parliament of geographical representatives. The main criticism of the FPTP system is that it has "an inbuilt disproportionality" (Rose). Minor parties are excluded from fair representation as the number of votes won does not equate to the number of seats obtained in Parliament. ...read more.

Many Labour MPs, when asked for their opinion on the matter, refer to their signing of the Make Votes Count "Call for Democracy". Typically, Conservatives are against electoral reform as they have traditionally seen most success under the current system. In England at least, the FPTP system often over-represents Conservatives and for this reason many see no reason for change. In the Welsh Assembly, however, despite one in five Welsh people voting Conservative, the party did not win a single seat in the 1997 Election. Conservative MP for Canterbury Julian Brazier refers to the Labour founded Jenkins Commission (ICVS) to show his approval of the current scheme: "As you know, the Labour Party set down four criteria by which Jenkins was to judge an electoral system: broad proportionality, voter choice, stable government and maintenance of a link between MPs and geographical constituencies. The current British system fulfils all of these proposals. In fact, our current system fulfils the criteria better than the 'AV+' proposal." Liberal Democrats are poorly represented under the current system and consequently the party advocates electoral reform. As mentioned above, minor parties suffer the most with FPTP and have the most wasted votes as a result of being third in a dominant two party system. When asked, the majority of Liberal Democrat MPs "follow the party line, i.e. STV, with AV+ as a step in the right direction," (Sue Doughty, Liberal Democrat MP for Guildford). ...read more.

The system ensures the targeting of marginal seats is reduced and producing majority governments, thus eliminating the possibility of coalition governments if the voters so choose. Conversely, the possibility of tactical voting is still probable and the ballot papers can be considered too complicated for the masses. The proposed larger constituencies damage the link between MPs and their constituencies, but not to such an extent that it would be greatly noticed as between 550 and 600 constituencies would still be in use. The system used to vote members into the devolved Scottish Parliament is the Additional Member System. This is similar to the AV+ model in that voters have two votes, one for their choice of the 73 MSPs voted in using FPTP and one for the 56 MSPs using proportional representation (top-up members). This is a system also used in Germany, New Zealand (called Multi Member Proportional Representation) and Japan. Elections for the Welsh Assembly are also carried out using this system. In Northern Ireland local elections, the Single Transferable Vote (STV) has been used since 1973. This is related to the AV system as voters indicate preferences on the ballot paper, but the STV works in multi-member constituencies. Voters can choose from a list of candidates proposed by parties so there is much greater choice and there are no wasted votes, as votes can be transferred such as in the AV system. When all votes have been cast, the winning candidate must achieve over a certain quota. Any votes over this are transferred to those voters' second preferences. ...read more.