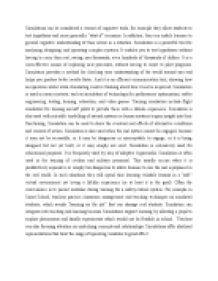 ﻿Simulations can be considered a variant of cognitive tools, for example they allow students to test hypothesis and more generally "what-if" scenarios. In addition, they can enable learners to ground cognitive understanding of their action in a situation. Simulation is a powerful tool for analyzing, designing, and operating complex systems. It enables you to test hypotheses without having to carry them out, saving you thousands, even hundreds of thousands of dollars. It is a cost-effective means of exploring new processes, without having to resort to pilot programs. Simulation provides a method for checking your understanding of the world around you and helps you produce better results faster. And it is an efficient communication tool, showing how an operation works while stimulating creative thinking about how it can be improved. Simulation is used in many contexts, such as simulation of technology for performance optimization, safety engineering, testing, training, education, and video games. Training simulators include flight simulators for training aircraft pilots to provide them with a lifelike experience. Simulation is also used with scientific modelling of natural systems or human systems to gain insight into their functioning. Simulation can be used to show the eventual real effects of alternative conditions and courses of action. ...read more.

Real pendulums are subject to friction and air drag, so the amplitude of their swings declines. The period of swing of a simple gravity pendulum depends on its length, the local strength of gravity, and to a small extent on the maximum angle that the pendulum swings away from vertical, ?0, called the amplitude. It is independent of the mass of the bob. If the amplitude is limited to small swings, the period T of a simple pendulum, the time taken for a complete cycle. For small swings the period of swing is approximately the same for different size swings: that is, the period is independent of amplitude. Successive swings of the pendulum, even if changing in amplitude, take the same amount of time. For larger amplitudes, the period increases gradually with amplitude. There are three different types of oscillation that are free oscillation, damped oscillation and fixed oscillation. Free oscillations occur while the pendulum is sets to its displacement and is moving in its to and fro motion it does not experience any force that prevents it from continuing this motion. Such forces that prevent free oscillation is air resistance. ...read more.

For students learning about simulation this is a brilliant introduction for them (aside from being a good example of an finished piece of work) and I recommend that anyone studying Computing at A level has a read!

Undoubtedly a five star piece of work. One or two minor errors aside this is very polished. It shows depth of research, learning on the part of the student and provides a professional appraisal of many aspects of simulation.

The writing is "pacey" and very readable. it engages the reader who cannot fail to appreciate the role of simulation and be able to give some general and specific examples of where it can be used. Advantages are properly presented (although some more narrative on disadvantages would provide some balanced evaluation of simulation) and these are given objectively.

The use of the STELLA package and the particular situation used to put the minutia of the principles of simulation into lay speak is effective and well considered.

Overall an impressively research and objectively presented piece of work.