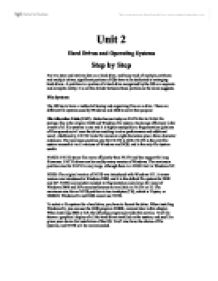 Unit 2 Hard Drives and Operating Systems Step by Step For it to store and retrieve data on a hard drive, and keep track of multiple partitions and multiple drives, significant portions of OSs have to be dedicated to managing hard drives. A partition is a portion of a hard drive recognized by the OS as a separate and complete entity; it is not the divider between these portions as the name suggests. File Systems The OS has to have a method of storing and organizing files on a drive. There are different file systems used by Windows and DOS to serve that purpose: File Allocation Table (FAT): Better known today as FAT16 for its 16-bit file storage, this is the original DOS and Windows file system. Its storage efficiency is the lowest of all file systems in use and it is highly susceptible to fragmentation (portions of files spread out all over the drive resulting in slow performance and additional wear). Additionally, FAT16 limits file names to eight characters plus a three-character extension. ...read more.

The reason for this is that Windows files are in use. In many cases, major changes won't be made until the computer is rebooted. The following sections are overviews of the programs. FDISK FDISK is a program that runs in DOS, and is useful mainly in 9x. Very old versions of FDISK aren't compatible with FAT32; if you run into this problem, it shouldn't be difficult to obtain a newer version disk. No version of FDISK is compatible with NTFS. FDISK allows you to view partition information, create or delete a partition or logical drive, and set a partition to active status. When you get the command prompt, type FDISK. The first thing you'll see, unless you have a tiny hard drive, is a message asking if you want to enable support for large disks (larger than 504MB). Always answer yes (Y) to this prompt. The main menu then appears. You should usually start by viewing partition information by selecting number 4 from the menu. If you are installing a new hard drive, partition the drive as desired. Unless you have a compelling reason to have multiple partitions, such as setting up a dual- or multiple-boot system, create a single partition. ...read more.