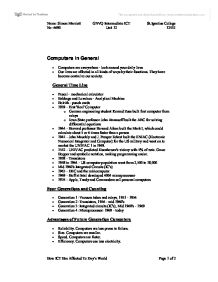 The Development of Information Technology

Businesses today mainly use Ethernet as their default communication link. As in our lives where we have a multi-cultured society where people of all different ethnic and racial backgrounds communicate over a common language, networks today also have a multi-background society. This is a network of multiple flavours of system, UNIX LINUX OS2 WINDOWS, So we have a variety of computer types in networks these days, for these computers to communicate successfully, we need to use a common communication method so they will all understand and be able to chat with each other. Ethernet is a way of connecting multiple computers together so they may chat. Name: Simon Marriott GNVQ Intermediate ICT St.Ignatius Collage No: 6690 Unit 12 12532 How ICT Has Affected To Day's World Page 1 of 2 ...read more.