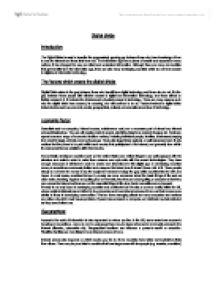 The Digital Divide is used to describe the progressively growing gap between those who have knowledge of how to use the Internet and those that have not.

Digital divide Introduction The Digital Divide is used to describe the progressively growing gap between those who have knowledge of how to use the Internet and those that have not. The Information age has a phase of wealth and success for many nations. It has changed the way we collect and understand information. Although there are many communities that get benefits from the Information age, there are also many developing countries which do not have access to digital and information technology. The factors which create the digital divide Digital Divide refers to the gap between those who benefit from digital technology and those who do not. It's the gap between those people with effective access to digital and information technology, and those without or limited access to it. It includes the imbalances in physical access to technology. There are many reasons as to why the digital divide has occurred, is occurring, and will continue to do so. Factors involved in digital divide include factors such as economic, social, geographical, cultural, and educational and fear of technology. Economic factor Essentials such as computer, internet access, maintenance cost, are a necessary part of almost any Internet access infrastructure. They are all ongoing costs in people, electricity, telephone network charges, etc. Costs are spread across a range of economic decision makers, including individual people, families, businesses (ranging from small to large), schools, community groups. ...read more.

Whereas an older person may not have the same skills, they may have written their application by hand and therefore are at a disadvantage because some businesses will judge by the presentation. As I mentioned before, this can be very stereotypical and it is not always the case. Some older generations, that for example may be particularly interested in technology, may have the same knowledge as someone younger - they have a lot of time on their hands and therefore may be able to spend more time learning new things. Economical In countries which economic resources are limited, however, it remains that digital resources will necessarily be secondary to other spending priorities, including food, shelter, health, safety, and security needs. Certain countries have a more difficult time finding the resources to invest in digital infrastructure, resources, and services. Most of those businesses will need to use digital technology to communicate with customers, suppliers, and business partners in other countries. At commercial level, businesses who log on themselves to the web, will earn themselves huge profit especially in trading. And there are also certain countries like Indonesia who does not intent to share their economies to the world because it's unaffordable for them. In countries where the internet and other technologies are not accessible, education is suffering, and uneducated people cannot compete in the global economy. This leads to poor countries suffering greater economic downfall and richer countries advancing their education and economy. ...read more.

Nonetheless it's a sign of progress that such attempts at bridging the digital divide are seriously being made. [46] Additional participants in such endeavors include the United Nations Global Alliance for ICT and Development and the Digital alliance Foundation. The United Nations is aiming to raise awareness of the divide by way of the World Information Society Day which takes place yearly on May 17. It also set up the Information and Communications Technology (ICT) Task Force in November 2001. At the Massachusetts Institute of Technology, the IMARA organization (from Swahili word for "power") sponsors a variety of outreach programs which bridge the Global Digital Divide. Its aim is to find and implement long-term, sustainable solutions which will increase the availability of educational technology and resources to domestic and international communities. These projects are run under the aegis of the MIT Computer Science and Artificial Intelligence Laboratory (CSAIL) and staffed by MIT volunteers who give training, installed and donated computer setups in greater Boston, Massachusetts, Kenya, Indian reservations the American Southwest such as the Navajo Nation, the Middle East, and Fiji Islands. The CommuniTech project strives to empower underserved communities through sustainable technology and education. Some cities in the world have started programs to bridge the digital divide for their residents, school children, students, parents and the elderly. One such program, founded in 1996, was sponsored by the city of Boston and called the Boston Digital Bridge Foundation.It especially concentrates on school children and their parents, helping to make both equally and similarly knowledgeable about computers, using application programs, and navigating the Internet. ...read more.