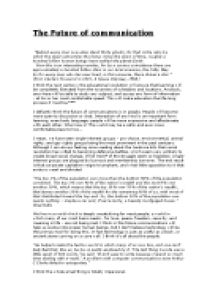 The Future of communication.

﻿The Future of communication -"Behind every man now alive stand thirty ghosts, for that is the ratio by which the dead outnumber the living. Since the dawn of time, roughly a hundred billion human beings have walked the planet Earth. --Now this is an interesting number, for by a curious coincidence there are approximately a hundred billion stars in our local universe, the Milky Way. So for every man who has ever lived, in this universe, there shines a star." (from Clarke's foreword in 2001, A Space Odyssey, 1968) I think the next century; the educational revolution will ensure that learning will be completely liberated from the tyrannies of schedules and locations. Anybody, anywhere will be able to study any subject, and access any form of information - at his or her most comfortable speed. This will make education the life-long process it must be.*** I defiantly think the future of communications is in people. ...read more.

The top 1% own 40% of the nation?s wealth and the next 9% own another 30%, which means that the top 10% own 70% of the nation?s wealth; that leaves another 30% of the wealth for the remaining 90% of us, with most of that distributed toward the top end. So, the bottom 50% of the population own nearly nothing ? maybe a car and, if we?re lucky, a heavily mortgaged house.? Chaz Bufe We live in a world which is deeply unsatisfying for most people, a world in which many of our most basic needs - for love, peace, freedom, security, and meaning in life - are not being met. I think in the future communications will help us evolve into proper human beings. But I don?t believe technology will be the primary tool for doing this. In fact technology is just as useful as a book, or ancient stone carving on a cave wall. ...read more.

But reading reports it's far from perfect. ZEGG sounds like it is an exciting place, if not a very important model for communication, filled with ideas, supportive people pursuing their passions, and which incorporates in what looks like the willingnest to communicate in a totally human way. I find, and as demonstrated; a high level of communication reduces xenophobia because persons who exchange valuable information and therefore have to rely on each other, tending to be less hostile. Tecnology will form some kind(s) of communication network(s) and will surpass language barriers, and the existing babel of tongues. Tho…. It makes me think if it were possible to flee from all communication to a faraway island, or is there no escape from the social control and obligation to remain within reach? â¹ I do think that I will be taking photos to remind myself of my life when I am old. This Email conversation… improving our communication??? ...read more.

In summary, the report is very poor. The report does contain four quotes, which isn't their work. In addition, the report contains alot of their opinions, which aren't justified. Some of their opinions are in-correct and simply false. The student does have some very strange opinions, which are quite wrong. The report does contain four different quote's, which is quite concerning. As the report should be written from the student's own understanding, and not from the understanding of others. The student will not be awarded any marks, for these sections, as this is not their work.

The report does contain quite a large amount of the student's own opinion, as this is fine along as the student has justified their opinion with some type of evidence. The report doesn't contain any such evidence. The report could include something on the lines of 'I believe that people will become more open with information, with the use of social networking websites, such as Facebook and Twitter. As users are encouraged to share information on their profiles, as the websites will gain more advertising revenue, if more information is posted on the website.

The writing is quite informal, and this isn't processional. The student would need to re-read the report and place the words into a processional style.