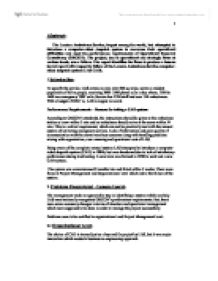 The London Ambulance Service: a critical study on the failure story

Abstract: The London Ambulance Service, largest among the world, had attempted to introduce a computer-aided despatch system to overcome their operational difficulties and meet the performance requirements of Operational Research Consultancy (ORCON). The project, due to operational and strategic flaws at various levels, was a failure. The report identifies the flaws to produce a lessons learnt report with respect to failure of the London Ambulance Service computer-aided despatch system (LAS CAD). 1 Introduction: To specify the service, LAS covers an area over 600 sq miles, serves a resident population of 6.8 m people, receiving 2000-2500 phone calls a day, where, 1300 to 1600 are emergency '999' calls. Service has 2700 staff and over 750 ambulances. With a budget of �69.7 m, LAS is largest in world. Performance Requirements - Reasons for taking a CAD system: According to ORCON's standards, the instructions should be given to the ambulance station or crew within 3 min and an ambulance should arrive at the scene within 14 min. This is a critical requirement, which can not be practically met with the manual system of activating emergency services. Lack of information and poor quality of communication with the crews were key concerns along with handling problems arising with organization, over-manning and operational cost of LAS. Being aware of the complete manual system LAS attempted to introduce a computer-aided despatch system (CAD) ...read more.

The structure gives a clear picture of responsibilities once every team member was properly communicated with the structure set. CAD, being an innovative project being handled by LAS encountered ambiguities over managerial role of the contractor. Project also encountered a lack of middle level management which led to an addition of unexpected and extra responsibilities being fell on the Director of Support Services, who found him spending more of his time in low level coordination and progress chasing. The involvement of ambulance crews was considered to be very little in developing a SRS. The hard ware manufacturer, who took the role of prime contractor, was not prepared to set up to execute his role and rapidly withdrew from activities of this nature. The contractor and systems manager found them selves not qualified for IT procurement and need to be replaced. The responsibilities of activities should have been clearly stated before attempting to prepare an SRS (along with team responsible to produce SRS). The ambiguities in managerial role of the contractor which resulted in inefficient progress in him leading the project would have been avoided if the responsibilities are clearly stated before accepting the job by contractor. As this happens only if contractor in the managerial role is self sufficient in terms of his duties and expertise, proper definition of contractor's responsibilities would have solved a part of problems. ...read more.

Functional testing to ensure that CAD does what is expected of it and Load testing to test the ability of the system to perform under maximum load would have added the completeness and quality to the performance of the system as few problems can not be simulated and can be seen only in real time. Though CAD was not termed to be a technical failure, the flaws in system development caused the system failure. A systems development methodology would have helped avoid many flaws in the LAS CAD. A system development life cycle approach would be of better choice rather than a single inheritance model of developing, testing (inappropriate environment), implementing. An experience project manager would have added this sugar and thus, this is to the notice of top level management. 3. Conclusion: Identifying the flaws it encountered, LAS should under go an analysis phase to figure out operational and technical feasibility in undertaking CAD. With system errors being identified and aligning experienced and relevant human resource would add the proximity of system being a success. An understanding of re-engineering project would help the top level management identify the change-management required. With a better communication of these to the organizational personnel, any future trails to undertake an innovation would be the interest of employees at all levels too, rather than only of top management. ?? ?? ?? ?? 1 ...read more.