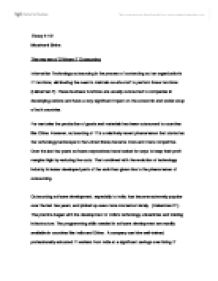 The new era of Offshore IT Outsourcing.

Essay 4-101 Moushomi Sinha The new era of Offshore IT Outsourcing Information Technology outsourcing is the process of contracting out an organization's IT functions, eliminating the need to maintain on-site staff to perform those functions (Lieberman 7). These business functions are usually outsourced to companies in developing nations and have a very significant impact on the economic and social setup of both countries. For centuries the production of goods and materials has been outsourced to countries like China. However, outsourcing of IT is a relatively recent phenomenon that started as the technology landscape in the United States became more and more competitive. Over the last few years software corporations have looked for ways to keep their profit margins high by reducing the costs. That combined with the evolution of technology industry in lesser developed parts of the world has given rise to the phenomenon of outsourcing. Outsourcing software development, especially to India, has become extremely popular over the last few years, and picked up even more momentum lately. ...read more.

It gave him the opportunity to travel the world. His career was flourishing when suddenly his company started outsourcing work to India. Since then, his career has been on the downslide. He has been struggling to find a secure, well paying job. The only jobs that he seems to find are the ever diminishing contracting opportunities. (Worthen 1) Like many other Americans, he was strongly opposed to the H1 visa program that allowed software engineers from India, China and other countries to work in the US. Such opposition and the high unemployment rate led the US government to slash the visa limit for skilled foreign workers in the US (Lochhead 1). This was a positive step for US technology workers like Daniel but wasn't nearly enough to reduce the pace at which companies were sending jobs to countries like India and China. In India, the software industry is booming and the picture looks bright and rosy for the Indian software engineer. ...read more.

Having grown familiar with their offshore partners, corporations are now handing over more complex work (Lieberman 13). This means increased number of job losses for the service sector in the US. Some consider outsourcing as a threat to the national security of America because of the nature of jobs that are getting outsourced. As firms export critical business and technical knowledge, they risk losing core competencies, in-house expertise, and future talent. The future of America's competitive R&D prowess is being challenged because of outsourcing (Lieberman 23). Outsourcing is increasingly taking stronger roots in America and around the world. The demand for cheap labor coupled with availability of skilled workers in less developed parts of the world has led to this phenomenon. Even though it continues to meet with resistance in countries where jobs are lost everyday, it hasn't lost its momentum and is increasingly becoming an integral part of the way companies do business and stay competitive. This is changing the dynamics of the business industry and has a very strong impact on social and economic fabric of the countries around the world. ...read more.