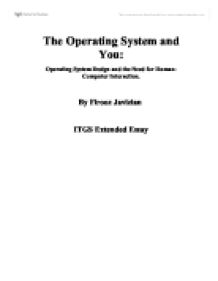 The Operating System and You: Operating System Design and the Need for Human-Computer Interaction. By Firooz Javizian ITGS Extended Essay Abstract: This paper will deal with the current state of operating system design and how exactly this level was reached. This paper will show how the design of operating systems has increased the human-computer interaction by simplifying tasks that would normally take most of the user's time. The operating system itself will be shown to be the resource manager for these tasks, allowing the user to concentrate on the job at hand for him/her without worrying about interfacing with the computer to manage the CPU, print characters to the display screen, etc. The progression of operating system development will also be examined which will show how operating systems have advanced to manage more functions on their own without user intervention. Lastly the current popular trend in operating system development, graphical user interfaces (GUIs) will be examined to show how this design has eased the use of computers in general more by increasing the human-computer interaction by eliminating the sometimes complex and obscure commands to execute tasks which were common of older operating systems. The conclusion thus reached is that through a progression in operating systems design that enhance the human-computer interaction, the usability of computers has increased so that even novice users may use a system as complex as the computer without realizing this fact because of the operating system design. (220 words) Table of Contents Abstract P. 2 Contents Page P. 3 Main Essay: (2608 words) * Introduction P. 4 * What is an Operating System? P. 5 * The Necessity for Human-Computer Interaction P. ...read more.

a time and smoothed the transition between jobs to get maximum utilization of the computer system."5[5] Being designed at first primarily for research and technical work, operating systems gradually evolved to speed up this process of job transition. Operating systems moved from single-user states to multi-user in which multiple users could log into the system and not have their presence (their work) be noticed by other users. This was a significant advancement for operating systems, making the systems handle many users while keeping the users separate so that they were not interacting or interfering with each other's work. The explosion of computing did not occur until the 1980s when IBM introduced its personal computer into the marketplace. The 1980s saw the microprocessor revolution6[6] whereby the integral components of the computer such as the CPU, memory, etc. could fit onto a single chip. With this reduction in size also came a reduction in price that meant everyday people could afford computers and not just large corporations and academic institutes. The operating system of choice packaged with these first personal computers (PC's) of IBM, the IBM 5150 PC Personal Computer is none other than one of the most widely known operating systems in the world today, PC-DOS 1.0 (Microsoft's MS-DOS)7[7]. Operating systems had advanced from "...primarily multimode timesharing systems that supported batch processing, timesharing, and real-time applications..."8[8] to PC-DOS, "the first 16-bit microcomputer system."9[9] While many of the smaller and less-known operating systems have developed along the way to the 1980s when Microsoft's Disk Operating System (MS-DOS), a historical listing will not be presented. Instead, an examination of two of the most significant operating systems, UNIX and MS-DOS will be examined with reference to their levels of human-computer interaction and importance for both academic/research institutions (UNIX) ...read more.

"The operating system permits users to express their requirements in terms meaningful to them, instead of in the language specific to some conglomeration of circuits and registers."18[18] Following the statistics presented by the US Census Bureau (see Appendix), with the trend towards graphical user interfaces becoming the current standard in operating system design, the use of computers has similarly increased. Effective design of the operating system has reached a new standard as the use increases. Not only must the previous factors be taken in to account for operating system design such as effective managing of resources, but the visual attractiveness for the novice user to want to use and comprehend also plays an important role. Designers must now balance these two factors: functionality and presentation for future operating systems. "What makes an [operating system] something that grows on you or something that you learn to loathe is it's design and attention to detail."19[19] As our society continues to maintain the visual medium as the primary way of transmitting information, the design of operating systems will continue to be visually intensive to cater the predominant market. That is not to say, however, that purists will not remain to use operating systems that are primarily command based and not a GUI. Either way, GUI or not, operating systems provide an invaluable resource for facilitating the easy use of a computer by any level of users. The operating system has made the human-computer interaction easier on the whole by taking away a level of complexity from the user, allowing him/her to focus more on performing the functions that they wish to use the computer for, such as word processing for example. A friendlier and more productive environment in which to work is the result of the operating system, making interacting with the computer a much easier task for users of all skill levels. ...read more.