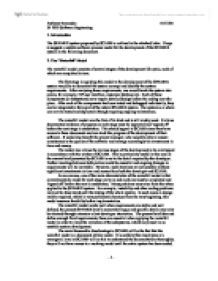 1. Introduction The SPAMEX system proposed by SCABB is outlined in the attached letter. I hope to suggest a suitable software process model for the development of the SPAMEX system in the following document. 2. The 'Waterfall' Model The waterfall model consists of several stages of the development life-cycle, each of which are completed in turn. The first stage in applying this model to the development of the SPAMEX system would be to document the system concept and identify the system requirements. After analysing these requirements, one would break the system into pieces, for example; TIP user interface, customer database etc. Each of these components (or subsystems) now require detailed design before the coding can take place. After each of the components has been tested and debugged individually, they can be integrated to form part of the whole SPAMEX system. The system as a whole can now be tested and deployed although requiring ongoing maintenance. The waterfall model was the first of its kind and is still widely used. It allows documented evidence of progress as each stage must be approved and 'signed off' before the next stage is undertaken. This should appeal to SCABB since they have access to these documents and can track the progress of the development of their software. It would also benefit the project manager, who would be able to ensure consistency in the quality of the software and manage accordingly his investments in time and money. ...read more.

These stages may be repeated any number of times until a final version of the system is presented. The speed at which such development takes place is reliant upon the number of prototypes which are created and the speed at which each one of them is developed. This requires special skills in rapid prototyping which are expensive and will add to the overall cost of the system as well as the time which it takes to develop. Furthermore, if contracts are made to outside developers with skills in rapid prototyping, their methods may not be compatible with in-house developers. When applying such a model, there is often a lack of process visibility since it is hard for either party to foresee the end result. However, evolutionary development is very useful for the rapid development of subsystems, for example; the TIP or TAC user interface. This would allow SCABB to trial the front-end of the system and offer feedback to the developer without concerning themselves with the inner workings of the system. It is true that design issues are cheaper and easier to resolve through experimentation rather than analysis; this is why evolutionary development is often favoured as it allows a structured, disciplined avenue for experimentation. 3. Re-use Orientated Development Re-use orientated development is based on the systematic re-use of existing components. ...read more.

The spiral model is reflection of real-world practices rather than a theoretical model. This however can also be a disadvantage since it is relatively complex and difficult to follow strictly. It is only really suitable for large systems, not necessarily SPAMEX since we have already sub-divided it into TIP, TAC and PAT. An important issue that developers may be concerned with is the need for expertise in risk evaluation and reduction which is going to significantly increase the cost of development. 5. Conclusion I have chosen to develop the SPAMEX system using evolutionary development and throw-away prototyping. At present, SCABB have proposed only the outline for SPAMEX, to apply any other process model to a situation such as this would leave the client with unwanted results. Using throw-away prototyping however gives SCABB a chance to get a better understanding of the system they require and allows the developer to produce a much more refined system. This is done through a series of meetings between client and developer where SCABB would evaluate a rapidly developed system prototype and give feedback to the developer. The developer can use this new information to improve the system and present a more suitable prototype to SCABB at their next meeting. The result would be a highly refined system that has been developed with a customer-orientated focus. Anthony Fernandez 07/11/03 IN 1005 Software Engineering - 1 - ...read more.