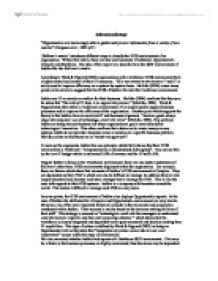 Information Strategy "Organizations are increasingly able to gather and process information from a variety of new sources" (Ferguson et al., 2005 p51) 'Sullivan's matrix' introduces different ways to classify the IT/IS environment of an organisation. Within this matrix, there are four environments: Traditional, Opportunistic, Complex and Backbone. The idea of this report is to describe how the IS/IT environment of Inditex fits into Sullivan's matrix. According to Ward & Peppard (2002) organisations with a traditional IT/IS environment have a highly centralised control of their IT resources. "IS is not critical to the business" and IT is solely used to improve efficiency on a system-by-system basis. McAfee (2004) raises many points in his article to suggest that the IT/IS of Inditex fits into this Traditional environment. Inditex see IT as merely an enabler for their business. McAfee (2004) confirms this theory as he states that "The role of IT, then, is to support the process" (McAfee, 2004). Ward & Peppard state that within a Traditional environment, IT is simply used to support business processes and to improve the efficiency of the organisation. Another point which supports the theory is that Inditex have an excellent IT and business alignment. "business goals always shape the company's use of technology, never vice versa" (McAfee, 2004). ...read more.

This may be a factor as the business processes are highly customised, thus the stores may be dependent on PDA's for instance. However, we do not have enough information from the article to be sure whether traits of the Backbone environment exist within their structure. In the late 1990s when other organisations spent vast sums of money on new technologies, Inditex withheld a Traditional framework. Great success has ultimately been achieved while "The relative absence of computers throughout Inditex is nothing short of amazing" (McAfee, 2004). Inditex has minimized the use of technology to their business needs and therefore they perform efficiently. In our opinion it is not important to classify which IT/IS environment Inditex has. It is more important that the IT/IS environment matches the business environment and the business needs so that IT can become a value creator in the organisation. There are different types of information, which organisations have to handle. Examples of such information types include business process information (which documents any information about the processes of the organisation), information relating to physical-world observations (which relies on new technologies like GPS or RFID) and biological data containing biometrical information of their customers or employees. Government institutions also use public data like CCTV for public surveillance but the most important data types are those which indicates personal preferences or intentions which is often used by those within the retail market. ...read more.

Tesco provide us with a good example of this cross-over in culture definition as information is generally produced at the managerial level and distributed amongst the workforce while it can also be shared amongst line managers and employees at all levels throughout the organisation. An enquiring culture is also used to develop certain areas of the business to enable future profitability while a discovery culture is in place for Tesco's attempted entry into markets such as insurance, banking and Internet broadband. All of these points convey Tesco as a 'multi-culture' organisation where different sectors of their business follow different cultures. As we have discussed, the behaviours and attitudes of a workforce can have a profound effect on the success of an organisation's performance. For this reason, the information culture must match the requirements of employees in order to facilitate a successful information strategy. Trust and receptiveness are just two behavioural traits which must be monitored in order for employee acceptance. The importance of considering these factors is agreed by Ferguson et al. who state that "sustainable competitive advantage will rely on two very human characteristics: insight and trust" (Ferguson et al., 2005 p58). From this point, we can conclude that the consideration of human aspects is vital for the strategic success of information and without an information culture, it can be very difficult to monitor and influence the behaviour and attitudes of the workforce. ...read more.