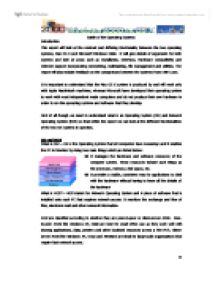 This report will look at the contrast and differing functionality between the two operating systems, Mac OS X and Microsoft Windows 2000.

Battle of the Operating Systems Introduction This report will look at the contrast and differing functionality between the two operating systems, Mac OS X and Microsoft Windows 2000. It will give details of arguments for both systems and look at areas such as Installation, Interface, Hardware compatibility and Internet support incorporating networking, multitasking, file management and utilities. The report will also include feedback on the comparisons between the systems from CNET.com. It is important to understand that the Mac OS X system is produced by and will work only with Apple Mackintosh machines, whereas Microsoft have developed their operating system to work with most independent made computers and do not produce their own hardware in order to run the operating systems and software that they develop. First of all though we need to understand what is an Operating System (OS) and Network Operating System (NOS) so that within the report we can look at the different functionalities of the two OS systems in question. OS and NOS What is OS? - OS is the Operating System that all computers have nowadays and it enables the PC to function by doing two main things which are listed below: * It manages the hardware and software resources of the computer system. ...read more.

longer to complete takes and more understanding and knowledge of the system needed Command line interface which accepts standard Unix commands, protection from doing damage unless logged in as root user which in impossible to do by accident. No protection from doing damage and system files, driver and exe files can be deleted easily. Thus causing the system or hardware not to work Overview - The OS X system has developed with leaps and bounds and has produced an excellent user interface enabling multitasking capabilities, File management facilities and is easily compatible to setup and use via a network. This version show flexibility like no other of the Mac's operating system but Windows 2000 still offers the familiar menus, facilities and hierarchical folder structure that most of us have grow to know and love. Overall it is felt that the OS X system is still too confusing and has a steep learning curve, but this could change through if it manages to get a better hold on the market. Section Three - SOFTWARE COMPATIBILITY Mac OS X Windows 2000 Behind Windows in this area and still is. Microsoft have adapted Office to run on the operating system and is developing versions of their software to be compatible Used on more PC's than Mac and have developed their programs to run along side the operating system. ...read more.

This has made the system easy to install, smooth integration of hardware due to being made by themselves and the integration of FireWire making it notably enhanced for media use in digital video creation and editing etc. Although the system has problems relating to shortcomings within the application software, this is about to be addressed, but may still fall behind in the Microsoft Windows domination. Within the Internet provision OS X is already in the fore running for becoming the best system this has been helped by its Unix development in the terms of performance and stability. Not many major changes or improvements are over apparent within Windows 2000 operating system but what must be remembered is that Microsoft dominate the majority of PC users today and until the Apple Mac's can increase its share of the market the vast amount of user's will stay with Microsoft and probable not even use or see the OS X system to its full potential. What we must also remember it that Microsoft has now developed another more innovating operating system more dynamic and user friendly that will give the OS X system a run for its money with "The all new, All singing Windows XP" it will be interesting to see how and what effect this will have on the ever developing and increasing market of computer technology. 12 ...read more.