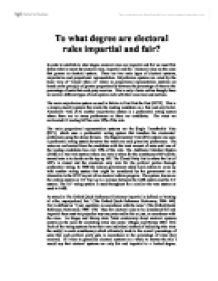 To what degree are electoral rules impartial and fair?

To what degree are electoral rules impartial and fair? In order to establish to what degree electoral rules are impartial and fair we must first define what is meant by electoral rules, impartial and fair. Electoral rules are the rules that govern an electoral system. There are two main types of electoral systems, majoritarian and proportional representation. Majoritarian systems are ruled by the basic view of 'winner takes all' where as proportional representation systems are based on the principle of greater proportionally between the percentage of votes to the percentage of seats that each party receives. This is only a basic outline though, there are several different types of each system each with their own rules and outlines. The main majoritarian system as used in Britain is First Past the Post (FPTP). This is a simple plurality system that elects the leading candidate on a first and only ballot. Alternative Vote (AV) another majoritarian system is a preferential voting system where there are as many preferences as there are candidates. The votes are reallocated till leading MP has over 50% of the vote. The main proportional representation systems are the Single Transferable Vote (STV), which uses a preferential voting system that transfers the electorates' preferences using the droop formula. The Supplementary Vote (SV) system also uses a preferential voting system however the voters are only given two preferences. ...read more.

thus the winning political party does not have to negotiate with smaller parties who were not given the authority and legitimacy to rule the country or implement their own programs. The Political Party in power is then also accountable for its own actions and thus can be removed by the electorate at the next election if they so wish to do so. As was such the case in 1979 with Callaghan's Labour Government and again in 1997 with Major's Conservative Government. Majoritarian systems also stop extremist parties such as the Rock and Roll Loony Party from being voted into Parliament, as they lack the concentrated support that is needed for a candidate to win in a constituency. The ministers themselves also are more independent from their party and therefore can act on their constituency's behalf rather than the party's behalf as unlike the Closed Party System the minister's nomination into parliament is not determined by the party. This therefore leads to a stronger link between an MP and his constituency thus making the MP accountable to his constituency. For example, in 1997 Michael Portillo lost the Enfield South Gate seat. Another advantage, which can be seen as part of the desirability of using such systems, is that FPTP is a simple straightforward electoral system, which the majority of people can understand, especially as it has been in use for a number of years. ...read more.

For example in the Scottish Parliament elections of 1999 the Conservatives received 14% of the vote and 15.5 % of the votes under AMS. Had FPTP been used, however, the Conservatives would have failed to win any seats. The top-up MP's also means that more views can be represented in parliament and fewer of the electorate's votes are wasted. Another advantage of using PR systems is that, unlike with majoritarian systems, PR systems give representation to minor parties who do not have concentrated support. Fr example in the European Parliament election of 1999 the UK Independent party received two seats under the Closed Party List system where as in the previous election they had received none. Pluralism is thus, in this way, increased as more parties are represented giving a broader cross section of views. For example in the London Assembly elections of 2000 the Green Party received 12% of the seats. While it is possible under PR systems for one party to have a majority coalitions are usually generated and this can be considered a 'good thing'. This is because they mean a range of views are represented in government, while at the same time it gives minor parties experience in government and as over 50% of the electorate have voted for those in government it gives the government greater legitimacy and authority to rule. In February of 2000 a coalition was created between Labour and the Liberal Democrats for the Welsh Assembly. ...read more.