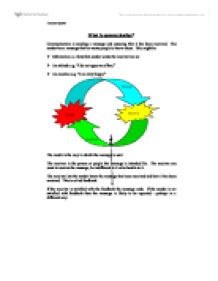 Electronic - radio, television, cassette recorders, telex, fax and computer networks Non-verbal - facial expression, use of the body Written communication Written communication can use words, and figures or a combination of both. ADVANTAGES > Written communication has the advantage that there is a written copy that later can be referred to if there is a dispute. Unless it is lost, stolen or destroyed, a written record can be used to check on what was said which could help to resolve disputes. > Written records provide > A permanent record of instructions given or decisions reached > An opportunity to give detailed instructions > The ability to reach a large number of people. Disadvantages > Be lost, destroyed or stolen > Be ignored > Give no chance for the receiver to ask for an explanation EXAMPLES ...read more.

A manager addressing a large number of people in his department could find people reluctant to ask questions because of the size of the meeting. DISADVANTAGES > No written record. This can lead to misunderstandings going uncorrected and disputes over who said or did not say what. > If the same message is passed through a large number of people it can get distorted. It only needs each person to change the message slightly for it to become nonsense. Visual communication > Photographs, diagrams, videos, and the layout of documents and notice boards are all used to convey information. Visual communication attracts people's attention, gives impact to the information and by simplifying it makes it easier t understand. Advertising is a good example of how a business uses a picture to communicate with potential customers. Graphs can be used to make figures easier to understand. Thomas Sparks ...read more.