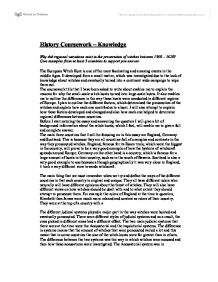 Why did regional variations exist in the prosecution of witches between 1560 &amp;#150; 1620? Give examples from at least 3 countries to support you answer

History Coursework - Knowledge Why did regional variations exist in the prosecution of witches between 1560 - 1620? Give examples from at least 3 countries to support you answer The European Witch Hunt is one of the most fascinating and amazing events in the middle Ages. It developed from a small matter, which was investigated due to the lack of knowledge about witches and eventually turned into a continent wide campaign to wipe them out. The coursework title that I have been asked to write about enables me to explain the reasons for why the small-scale witch hunts turned into large-scale hunts. It also enables me to outline the differences in the way these hunts were conducted in different regions of Europe. I plan to outline the different factors, which determined the prosecution of the witches and explain how each one contributes to a hunt. I will also attempt to explain how these factors developed and changed and also how each one helped to determine regional differences between countries. Before I start entering the essay and answering the question I will give a bit of background information about the witch-hunts, which I feel, will enable me to give a full and complete answer. ...read more.

Religion was to prove to be a problem throughout the whole period of the European witch craze. When the faults of the Church were brought to attention by radicals such as Erasmus and Luther it was only a matter of time before they got their way and the church was modified. A new base of Christianity was formed call Protestantism and this was going to be a big change for the continent of Europe to deal with. This was because a large rivalry sparked up between the two groups and stories started to spread. For examples catholic school children would be told that the Protestants were all witches who worked for the devil and the protestant school children would be told the same about the Catholics. All it meant was that the hysteria of witch craft, which was already high in the continent, managed to rise higher than before and people were as a result becoming more and more scared of being cursed by one. There was some unity on some aspects though. For example, both Catholics and Protestants in the 16th century had a renewed emphasis on the devil and the supernatural world. The Devil is recast as the equal of God but on the bad side, a sort of enemy to goodness. ...read more.

In England it was very rare for Witch Hunters to be sent out to find them, this is because it was viewed that if there is a problem with Witches then someone will speak out against they and that will be our queue to go in and try to get rid of them. The political elites also had a lot of influence when it came to the topic of witchcraft. This was because they had a lot of beliefs and views and as they were viewed as the intellectuals people trusted what they said. Out of all the groups of people who have senior authority, these men were probably the most influential and were able to sway people's minds. This meant that what they believed in, people believed in and it was due to some of the political elite's that the witch craze became as crazy as it did. In conclusion it is clear that there were many different variations between regions when it came to prosecuting Witches. This was due to factors such as influence from senior figure, rivalries, superstition and most importantly because of the legal system. I believe that without the variance in legal systems that we would not have seen the big differences between the different countries that we do see. ...read more.