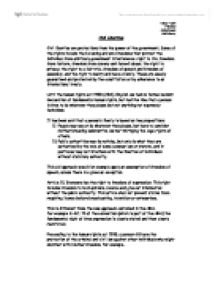 Civil Liberties Civil liberties are protections from the power of the government. Some of the rights include the following and are freedoms that protect the individual from arbitrary government interference; right to life, freedom from torture, freedom from slavery and forced labour, the right to privacy, the right to a fair trial, freedom of speech and freedom of assembly, and the right to marry and have a family. These are usually guaranteed and protected by the constitution or by adherence to an international treaty. Until the human rights act 1998 (HRA), English law had no formal modern declaration of fundamental human rights, but had the idea that a person is free to do whatever they please but not anything not expressly forbidden. It has been said that a person's liberty is based on two propositions: 1) People may say or do whatever they please, but have to consider neither breaking substantive law nor infringing the legal rights of others. 2) Public authorities may do nothing, but only do what they are authorised by the rule of some common law or statute, and in particular may not interfere with the liberties of individuals without statutory authority. This old approach would for example apply an assumption of freedom of speech, unless there is a gives an exception. ...read more.

Nor shall a heavier penalty be imposed than the one that was applicable at the time the criminal offence was committed. This Article shall not prejudice the trial and punishment of any person for any act or omission which, at the time when it was committed, was criminal according to the general principles of law recognised by civilised nations. Case Study Donatien Kisangani Mukatamwina, a human rights activist working for the Uvira-based Solidarity - Exchange for Integrated Development (SEDI), was arrested by agents of the Rwandan-backed Rally for Congolese Democracy (RCD-Goma) on June 27, beaten, and detained for thirteen days without charge. He was arrested at the nearby Burundi border as he was travelling for a short visit there. A few days before his arrest, security agents of the RCD-Goma visited the SEDI office and questioned the executive secretary, Remi Ngabo, about the organization's work and its funders. This case shows how the human rights of the man were breached because he wasn't presented with a fair trial. This resulted in him being badly assaulted and having false accusation on him. At the end of the thirteen day detain, he was released without charge. This shows that he was wrongly accused and arrested on grounds that were not reasonable. If there was a similar case in the UK, the citizen would have had the right to take police officers to court, and have a case brought upon them. ...read more.

* The protection of health or morals. * The protection of the reputation or rights of others. * The prevention of the disclosure of information received in confidence. * For maintaining the authority and impartiality of the judiciary Case Study On January 9, 1995, Jake Baker, a sophomore at the University of Michigan (Ann Arbor), posted a sexually explicit story to the Usenet newsgroup alt.sex.stories, which is devoted to sexually explicit material. (Usenet newsgroups are akin to electronic bulletin board systems, except that material is not stored in any single place but copied to all participating computers.) In the story, Baker describes the kidnapping, rape, torture, and murder of a young woman. Baker clearly labeled his story as containing "lots of sick stuff"; such material is not uncommon to the particular newsgroup where the story appeared. For the name of the woman in the story, Baker used the name of a woman in one of his classes. The woman did not know Baker and was not aware of the existence of the story until later notified by University officials. In summary of this case study, the pupil who made the article and gave it to the newspaper, did use his own initiative and changed the name of the original person, to someone that he knew from one of his university classes. In this way he didn't breach any acts of confidentiality, by disclosing the name of the person. ?? ?? ?? ?? Taheer Talati HEadway Amina Begum Civil Liberty ...read more.