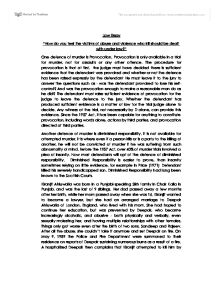 How do you feel the victims of abuse and violence who kill should be dealt with under law?

Law Essay "How do you feel the victims of abuse and violence who kill should be dealt with under law?" One defence of murder is Provocation. Provocation is only available in a trial for murder, not for assaults or any other offence. The procedure for provocation is that at first, the judge must have decided there is sufficient evidence that the defendant was provoked and whether or not the defence has been raised expressly by the defendant He must leave it to the jury to answer the questions such as - was the defendant provoked to lose his self-control? And was the provocation enough to make a reasonable man do as he did? The defendant must raise sufficient evidence of provocation for the judge to leave the defence to the jury. Whether the defendant has produced sufficient evidence is a matter of law for the trial judge alone to decide. Any witness at the trial, not necessarily by D alone, can provide this evidence. Since the 1957 Act, it has been capable for anything to constitute provocation, including words alone, actions by third parties, and provocation directed at third parties. Another defence of murder is diminished responsibility. It is not available for attempted murder. ...read more.

Even though the chain of events was not straight after each other due to Kiranjit Ahluwalia not retaliating straight away, and also leaving the house before setting Deepak on fire, I think that all she had suffered should have been taken into consideration and diminished responsibility should have been applied and that her lawyer should have taken more interest in the case. If the lawyer had taken more of an interest in the case, the fact that diminished responsibility could be applied would have been found out. She did not mean to kill him; just to save herself and the children from him. In "life term for a drunken rage murder (2009)", Arthur Pitt-Pladdy had intended to kill Kim Butler as he had stabbed her 177 times. He had also allowed himself to be in such a state by drinking so much alcohol and drugs that he could be in the "drunken rage". The jury found him guilty even though he denied it therefore he was sent to prison for at least 18 years and was treated as he deserved. I think it was right that he was sent to prison as he brutally killed her. In "Man jailed for strangling Ex-wife (2006)", Colin John Noddings had strangled his ex-wife and was found guilty of manslaughter. ...read more.

It is said that between 10-20% of people think domestic violence towards women is acceptable in some way in response to "nagging", flirting with other men, dressing in 'sexy' clothes in public, and not "treating him with respect". From looking at a table stating people's opinions on domestic violence, most people say it is not acceptable, however around 100 men a year kill their former or current partners, and provocation - such as failing to cook a meal, or persistent nagging - is the main form of defence used by barristers. On the site the table is on, a lot of people have commented on how they think domestic violence is wrong, but the posts are all or mostly from females. This suggests to me that females could be more against it or at least react to it in horror. Also, men are naturally more violent in general than women. In conclusion, I think that overall it depends on the circumstances. If someone was abused a lot to an extent that it can be proven that their mental state has been damaged then I think that diminished responsibility is right to be used. However, it should only be if there is proof as things such as someone cheated on them should not allow provocation to clear them. ?? ?? ?? ?? ...read more.