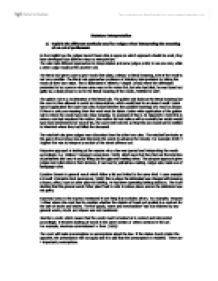 a) Explain the different methods used by Judges when interpreting the meaning of an act of parliament.

In the English law the judges haven’t been able to agree on which approach should be used, they have developed four different ways to interpret law.

The rules take different approaches to interpretation and some judges prefer to use one rule, while a other judge would prefer another rule.

The literal rule gives court to give words their plain, ordinary or literal meaning, even if the result is not very sensible. The literal rule approaches problems of statutory interpretation by taking the words at their face value. This is illustrated in Whitely v chapel (1868) where the defendant pretended to be a person whose name was on the voters list, but who had died, he was found not guilty as a dead person is not in the literal meaning of the words, ‘entitled to vote’.

The golden rule is a modification of the literal rule. The golden rule looks at the literal meaning but the court is then allowed to avoid an interpretation, which would lead to an absurd result. Under narrow application the court may only choose between the possible meanings of a word or phrase. If there is only one meaning then this word must be taken. Under wider application of the golden rule is where the words have only clear meaning. An example of this is Re Sigsworth (1935) this is where a son had murdered his mother, the mother did not make a will so normally her estate would have been inherited by her next of kin, the court write into the act that the son would not be entitled to inherited where they had killed the deceased.

The mischief rule gives judges more discretion then the other two rules. The mischief law looks at the gap in the previous law and interprets the words to advance the remedy. For example Smith V Hughes this was to interpret a section of the street offences act.

Purposive approach is looking at the reasons why a law was passed and interpreting the words accordingly. E.g. Mellons V Newport corporation (1950). Which says that they find out the intention of parliament and carry it out by filling out the gaps and making sense. The purpose approach gives judges more discretion in their decision, It can lead to judicial law-making. Judges also made use of launguage rules.

Ejusdem Generis is general words which follow a list are limited to the same kind. A case example is Powell V Kempton Park Racecourse (1899)  this is where the defendant was charged with keeping a house, office, room or other place for betting. He had been operating betting outdoors. The court decided that the general words ‘other place’ had to refer to indoor places and so the defendant was not guilty.

Expressio Unius is the express mentioned if one thing that excludes others. For example; Tempest V Kilner where the court had to consider whether the statute of frauds act applied to a contract for the sale of stocks and shares. The list ‘goods, wares and merchandise’ was not followed by any general words, stocks and shares was not mentioned.

Noscitur a sociis which means that the words must be looked at in context and interpreted accordingly. It involves looking at words in the same section or others sections in the act.

A presumption that Mens Rea is required in Criminal Cases, this means that no one can be convicted of a crime unless it is shown that they had the required intention to commit it. For example; Sweet V Parsley (1970) the defendant was charged with being concerned with the management of premises, which were used for the purposes of smoking cannabis.

A presumption that the crown court is not bound by any statue expressly says no.

A presumption that legislation does not apply retrospectively, this means that the act of parliament will not apply to past happenings, each act will normally only apply from the sate it comes into effect.

Intrinsic aids are the matters within the statute itself that may help to make its meaning clearer. The court can consider the long title, the short title. An example of this is the Theft act 1968 states it is an act to modernise the law of theft. The long title may also explain briefly parliaments intentions.

Extrinsic Aids are matters, which are outside the act. Some external sources can help explain the meaning of an act. Undisputed sources are; Previous acts of parliament on the same topic, the historical setting, Earlier case law, dictionaries of the time. The three main extrinsic aids are Hansard the official report of what was said in parliament when the act was debated. Law reform bodies such as law commission. International Conventions, regulations or directives, which have been implemented by English legislation.

B. Briefly consider the advantages and disadvantages of literal rule.

Advantages of the Literal rule is that it follows the words that parliament enacted, it also prevents unelected judges making law. The literal law prevents courts from taking sides in legislative or political issues. They also point out that ordinary people and lawyers do not have extensive access to secondary data. The literal rule results in a quick decision because the meaning is found in the dictionary or other source. The literal rule also respects parliamentary supremacy because a judges function is to apply the words of parliament and not to make law.

Disadvantages of the Literal Rule is that it is not always possible to word an act so as to cover every situation, this can mean that an act does not have the effect parliament intended as in the case of whitely v Chappell where the defendant was charged under a section which made it an offence to impersonate any person entitled to vote. The defendant had pretended to be a person whose name was one the voters list, but who had died. The court held that the defendant was not guilty since a dead person is not, in the literal meaning of words, entitled to vote. Another disadvantage is that following the exact words can also lead to unfair or unjust decisions as in the Berriman case. Words may also have more then one meaning so that the act is unclear.

Criticism of the literal rule is that it is the oldest rule of construction and is till used today, mainly because judges may not legislate, some judges may prefer to stick to the law’s literal wording.