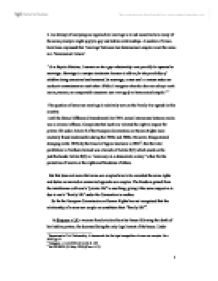 A number of views have been expressed that 'marriage' between two heterosexual couples is not the same as a 'homosexual liaison'.

2. An attempt of analysing our approach to marriage is to ask ourselves how many of the same principle might apply to gay and lesbian relationships. A number of views have been expressed that 'marriage' between two heterosexual couples is not the same as a 'homosexual liaison'. "As a Baptist Minister, I cannot see how gay relationships can possibly be equated to marriage. Marriage is a unique institution because it allows for the possibility of children being conceived and nurtured. In marriage, a man and a woman makes an exclusive commitment to each other. Whilst I recognise that this does not always work out in practice, no comparable situations can ever apply to homosexual couples"1 The question of same-sex marriage is relatively new on the Family law agenda in this country. Until the Sexual Offences (Amendment) Act 1957, sexual intercourse between males was a criminal offence. Complaints that such law violated the right to respect for private life under Article 8 of the European Convention on Human Rights were routinely found inadmissible during the 1950s and 1960s. However, things started changing in the 1970s by the Court of Appeal decision in 19812, that the total prohibition in Northern Ireland was a breach of Article 8(1) which could not be justified under Article 8(2) as "necessary in a democratic society" either for the protection of morals or the rights and freedoms of others. But that does not mean that same-sex couples have to be accorded the same rights and duties as married or unmarried opposite sex couples. The freedom gained from the interference with one's "private life" is one thing; giving it the same respect as is due to one's "family life" under the Convention is another. So far the European Commission on Human Rights has not recognised that the relationship of a same-sex couple as constitutes their "family life"3. In Simpson v UK a woman faced eviction from her house following the death of her lesbian partner, the deceased being the only legal tenant of the house. ...read more.

Thus, 'courts must now interpret all Acts of Parliament, if possible in a way that avoids sexual orientation discriminating violating Article 8 (private life) and 14 (discrimination) of the European Convention on Human Rights'23. The recent case of Ghaidan v. Mendoza,24 is an excellent illustration of this. Mendoza alleged that to grant a statutory tenancy to the survivor of a heterosexual relationship when the survivor of a homosexual relationship was entitled to the less beneficial assured tenancy amounted to discrimination on the grounds of 'sexual orientation'. The issue before the court was whether the facts of the case fell within the ambit of Article 8 (respect for home and private life) and Article 14 (discrimination) of the Human Rights Act 1998 and whether the different treatment of survivors of heterosexual relationships and survivors gay relationship had an objective and reasonable justification. It held that there was not a breach of Article 8 and although, as Buxton LJ stated, 'an uninformed reading of the bare words of that provision might suggest that a complainant had to establish an actual breach of another article of the Convention before he could rely on article 14, it would appear that even the most tenuous link with another provision in the Convention will suffice for Article 14 to enter into play'25. Further, when considering whether sexual orientation discrimination was within the bounds of Article 14, Buxton LJ stated26 'Looking at the question in 2002, it seems to me that there can only be one answer. Sexual orientation is now clearly recognised as an impermissible ground of discrimination'. Further, Keene LJ stated 'I do not accept that an objective and reasonable justification for discrimination has been made'27. It was clear that Sch.1.para 2 of the 1977 Rent Act infringed Article 14 and that the breach could be remedied by construing the words 'as his or her wife or husband' in Schedule 1 paragraph 2 as if they meant 'as if they were his or her wife or husband'28. ...read more.

Married couples are now allowed a great deal of freedom to arrange their own affairs in the way they want while they are still together, and when things go wrong, we try to prevent them doing too much damage to one another and their children. We also try to enforce their financial responsibilities to one another and to their children and both the present and future divorce laws give them some reason to stop for thoughts about their own and their children's future. So in practice, there is no real reason why a similar combination of choice and responsibility should not be adopted in homosexual relationships in order to promote certainty in a relationship, whether it is in marriage or a relationship. Moreover, in today's contemporary society, liberal minded individuals are not going to stand for laws which return to the inequalities of the past and surely they are not going to get married unless they want to do so. But for certain, they will have relationships outside marriage if they want to do so. A proportion of these will be same-sex relationships, regardless of whether others like it or not. Whether this is accepted on a legal or moral basis makes no difference at all and many have made it clear that the gay marriages were compatible with their religious beliefs. "As a Church of England priest, I warmly and wholeheartedly endorse the proposals for Civil Partnership registration for lesbian and gay couples. Justice for all is one of the central Christian teachings, and at the heart of the Bible. Lesbian and gay people who have made a commitment in a relationship deserve the same rights and benefits as heterosexual couples who marry"48 Thus if one agrees with the statement made by Lords Nicholls in Bellinger v. Bellinger abiding by marriage as a union between two member of the opposite sex, we may lose the chance of creating a legal environment in which term 'family life' can be extended to foster homosexual marriages and cease to continue to flourish and develop into the future, regardless of one sexual orientation. [3. ...read more.