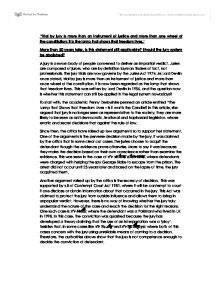 Trial by jury is more than an instrument of justice and more than one wheel of the constitution; it is the lamp that shows that freedom lives. More than 50 years later, is this statement still applicable? Should the jury system be abolished?

Therefore, the authorities above show that the jury is not competence enough to decide the conviction of defendant. Besides that, it was also argued that the racial bias in the jury brought up a lot of issues. Some claimed that due to the reason that the names of jury are randomly selected, it may not produce a cross selection society. When this happen, one would most likely to face a group of white people though he might have the option to challenge to the array. Even if he can challenge to the array, the court might choose not to accept on the ground that jury was chosen in a random manner as in the case of R v Ford. Therefore, based on the case of Sander v UK, the European Court of Human Rights held that the judge should have discharged the jury on the basis that they have made racist remarks and jokes. Some would also argue that with the technology developing nowadays, the people are provided with many forms of media. This media will indirectly influence the people's life and this does not exclude the jury. ...read more.

Thus, this shows that jury has more compassion than the judge. They are able to give verdict in favour of the public. Based on the disadvantages listed above, it is obvious that the role of the jury may not see as important as last time. Because of that, Sir Robin Auld Lj made a few recommendations in his Review of the Criminal Courts. In relation to racial bias, he recommend that jurors should be more widely representation than they are of the national and local communities and the qualification for jury service should be remained the same. Besides that, no one in future should be ineligible for, or excusable as of right from jury service. Any claimed inability to serve should be subject to discretionary deferral or excusal. In term of perverse decision, he recommends that the law should be declared by statute that juries have no right to acquit defendant if the evidence said otherwise. In conclusion, even though there are disadvantages of the sitting of juries in English Legal System, but since the recommendation of Auld report, the government has tried to work on it by enacting.. . It proves to be success as ...read more.