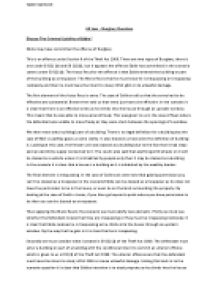 A2 Law burglary question. Eddie may have committed the offence of Burglary.

﻿Tajinder Singh Ranshi A2 Law ? Burglary Question Discuss The Criminal Liability of Eddie? Eddie may have committed the offence of Burglary. This is an offence under Section 9 of the Theft Act 1968. There are two types of Burglary, there is one under S9 (1) (a) and S9 (1) (b), but it appears the offence Eddie has committed in the scenario comes under S9 (1) (a). The Actus Reus for the offence is that Eddie entered the building or part of the building as a trespasser. The Mens Rea is that he must know he is trespassing or trespassing recklessly and then he must have the intent to steal, inflict gbh or do unlawful damage. The first element of the Actus Reus is entry. ...read more.

We then move onto building/ part of a building. There is no legal definition for a building but the case of B&S v Leathley gave us some clarity. It also showed us how wide the definition of building is. Looking at this case, the freezer unit was classed as a building due to the fact that it had steps and an electricity supply connected to it. The courts also said that anything with wheels on it will be classed as a vehicle unless it is inhabited by people only then it may be classed as a building. In the scenario it is clear that a house is a building as it is inhabited by the wealthy banker. The final element is trespassing. ...read more.

It is clear that Eddie realises he is trespassing as he climbs into the house through an upstairs window. By the way that he gets in it is clear that he is trespassing. Secondly we must consider what is stated in S9 (1) (a) of the Theft Act 1968. The defendant must enter a building or part of a building with the conditional intent to commit an ulterior offence which is given to us in S9 (2) of the Theft Act 1968. The ulterior offences are that the defendant must have the intent to steal, inflict GBH or cause unlawful damage. Linking this back in to the scenario question it is clear that Eddies intention is to steal property as he climbs into the house in the hope of finding something valuable which he can us for his own gain. If convicted of the Burglary Eddie is liable to face up to 14years in prison ...read more.