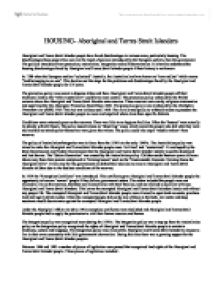 The government approved a mining lease and the Yirrkala wanted to prove that their tribe held native title over the reserve land. The court came to a decision "that Australia's status as "terra nullius" was a matter of law" therefore the "ownership of land in Australia was passed to the Crown when Australia was colonized and the courts could not change this law. This decision showed that there was still some approval of terra nullius. In the case of Mabo & Ors v. Queensland (No.2) (1992) 175 CLR 1 the Meriam people were found to be the traditional owners of Murray Islands in the Torres Strait. The courts found that the Meriam people were the traditional owners of the land for a number of reasons:- 1. They were the only inhabitants of the land. 2. Australia was not "terra nullius" - because of this the Crown did not completely own all land in Australia after colonization. 3. The Crown only owned parts of the land that the Aboriginal and Torres Strait Islander were not living on. 4. The Meriam proved that they had a continuos link to the land and still traditionally. The Mabo decision exonerated the doctrine of Terra Nullius and admitted that Aboriginal and Torres Strait Islanders held Native Title over the land. The Native Title Act (Cth) 1993 put the decisions and findings of the Mabo case into law. ...read more.