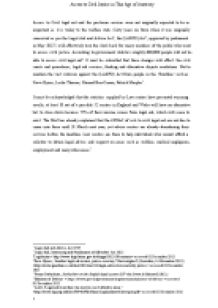 Access to Civil Justice in This Age of Austerity

ï»¿Access to Civil Justice in This Age of Austerity Access to Civil legal aid and the pro-bono services were not originally expected to be as important as it is today to the welfare state. Sixty years on from when it was originally conceived as per the Legal Aid and Advice Act[1], the (LASPO) Act[2], approved by parliament in May 2012[3], will effectively turn the clock back for many members of the public who want to access civil justice. According to government statistics roughly 600,000 people will not be able to access civil legal aid[4]. It must be submitted that these changes will effect: the civil courts and procedures, legal aid services, funding and alternative dispute resolutions. Not to mention the vast criticism against the (LASPO) Act from people in the ‘frontline’ such as: Steve Hynes, Leslie Thomas, Nimrod Ben-Cnaan, Patrick Marples[5]. It must be acknowledged that the statistics supplied by Law centres have presented worrying results, at least 18 out of a possible 52 centres in England and Wales will have no alternative but to close down because 75% of their income comes from legal aid, which will cease to exist. The MoJ has already explained that the £350m[6] of cuts to civil legal aid are not due to come into force until 31 March next year, yet advice centres are already abandoning their services before the deadline. ...read more.

The government's plans to cut back legal aid and financial support will soon disappear for most cases involving divorce, child custody, negligence in practices, employment laws, immigration and status, housing, debt, welfare benefits and education. It must be recognized that Steve Hynes's book demonstrates how the former justice minister Jonathan Djanogly wanted to introduce competitive tendering for criminal legal aid, yet this argument was not acknowledged by the rest during the debate and drafting stage of the Legal Aid, Sentencing and Punishment of Offenders Act, which became law this summer. Also, it is quite evident that Access to justice is likely to move back up the political agenda. An example of the detrimental effect of the cutbacks is seen by Shona Alexander, Newcastle's Citizens Advice bureau who was already denying people with issues, as the spending cutbacks could not provide. "Our legal aid contract for both welfare benefits and debt advice ends on 31 March and will not be renewed. Legal aid funding is paid only when cases are closed, so we have to stop taking on any new, complicated cases because they will not be completed before the end of the contract. Requests for welfare benefits advice here have increased dramatically during the last few weeks, as clients are being notified of impending cuts in housing benefit and other changes. ...read more.

lost down the line because more litigants in person would indicate longer hours of court service and money spent as the individual does not understand the civil court procedures. Yet, one can argue cases like the McLibel case illustrates that litigants in person are equally as successful but that is a rare opportunity and thus it can be argued is invalid. Lastly, by looking at the statistics between the Law offices and the Law advice centres it is clear that the Law advice centres have been used more than the Law offices and so it must be said that the pro bono services and legal aid are more important in terms of funding. Cuts to legal aid are to be bad theoretically because innocent people will be affected. Yet, with regards to the scope of legal aid services such as - immigration, negligence in practices and so forth, there is a feeling amongst the legal professionals and within the general public that the adversarial system is just a way of turning small disputes into bigger disputes to the benefit of the lawyers. If people had to sort out their own stuff perhaps with the aid of professional conciliation they would do it far better. Below the diagrams illustrate the difference in access to civil legal advice centres and law offices, the results prove an attachment towards legal aid. 13. ...read more.