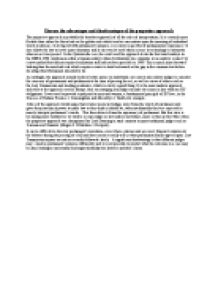 Advantages and Disadvantages of Purposive Approach

﻿Discuss the advantages and disadvantages of the purposive approach The purposive approach is probably the broadest approach of all the rules of interpretation. It is certainly more flexible than either the literal rule or the golden rule which tend to concentrate upon the meaning of individual words or phrases. In trying to fulfil parliament?s purpose, it is surely respectful of parliamentary supremacy. It also allows the law to cover more situations and it can even be used when science or technology is unknown when an act was passed . ...read more.

Accordingly, the approach usually leads to better justice in individual cases and it also allows judges to consider the concerns of government and parliament at the time of passing the act, as well as views of others such as the Law Commission and leading academics, which is surely a good thing. It is the most modern approach and reflects the approach used in Europe, thus encouraging our judges to make decisions in line with our EU obligations. It was used to provide equal pay for men and women, a fundamental principle of EU law, in the Diocese of Hallam Trustees v Connaughton and Macarthys v Smith, for example. ...read more.

purposive approach was championed by Lord Denning in stark contrast to more traditional judges such as Scarman and Simonds (Magor & St Mellons v Newport). It can be difficult to discover parliament?s intentions, even where external aids are used. Hansard contains all the debates during the passing of a bill and does not necessarily tell us what parliament finally agreed upon. Law Commission reports are not necessarily followed closely. A significant disadvantage is that different judges may construe parliament?s purpose differently and it is not possible to predict what the outcome in a case may be, thus leading to uncertainty and unpredictability for lawyers and their clients. ...read more.