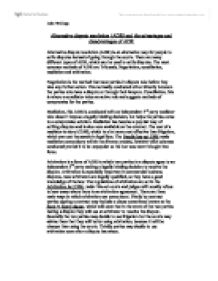 Alternative dispute resolution (ADR) and the advantages and disadvantages of ADR

Alternative dispute resolution (ADR) and the advantages and disadvantages of ADR Alternative dispute resolution (ADR) is an alternative way for people to settle disputes instead of going through the courts. There are many different types of ADR, which can be used to settle disputes. The most common methods of ADR are Tribunals, Negotiation, conciliation, mediation and arbitration. Negotiation is the method that most parties in dispute take before they take any further action. This normally conducted either directly between the parties who have a dispute or through their lawyers. Conciliation, this is where a conciliator takes an active role and suggests methods of compromise for the parties. Mediation, this ADR is conducted with an independent 3rd party mediator who doesn't impose a legally binding decision, but helps the parties come to a compromise solution. Mediation has become a popular way of settling disputes and is also now available on the onternet. The cost of a mediator is about �1500, which is a lot more cost effective than litigation, which can cost thousands in legal fees. ...read more.

Thirdly parties may decide to use arbitration soon after a dispute has arisen. Tribunals have been described as "bodies outside the hierarchy of the courts with administrative or judicial functions" (Curzon, dictionary of law, 1994 p378), which means that they do the same sort of job as judges in courts but they are not part of the courts. Tribunals are made up of one legally qualified chairperson and other lay member who aren't legally qualified but will be experts in the field in which the tribunal concerns for example in an industrial injuries tribunal the two lay members will medically qualified. There are over 70 different types of tribunals, which cover things like social security, immigration, mental health and employment. Employment tribunals cover areas such as unfair dismissal, redundancy, s****l discrimination and racial discrimination. The Franks Committee 1957 recommended changes to the tribunals, this proposed changes were implemented in the Tribunals and inquires Act 1958, which was re-enacted in 1971 and again in 1992. ...read more.

* Another advantage to ADR is that with Arbitration, and tribunals there is precedent that have to follow, so cases can be treated individually The main disadvantages to the use of ADR are: X There is a lack of funding within the ADR, which means there is no legal aid for applicants who want to resolve a dispute in a tribunal. This can leave applicant at a disadvantage if the other side can afford legal representation. X Another disadvantage is that most tribunals do not give a reason for their decisions, which makes it difficult to predict an outcome of most cases. X Also there have been some criticisms that some of the chairman in administrative tribunals where are biased because the government minister who the tribunal is against picks the chairperson. X Also there is no right to appeal even if new evidence becomes available. X Another disadvantage is that when a professional arbitrator is used the fees may be expensive because they are well qualified and well known. ?? ?? ?? ?? Luke Wellings ...read more.