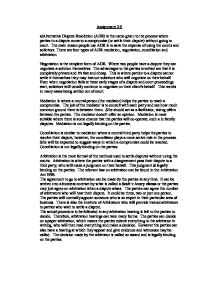 Alternative Dispute Resolution (ADR) is the name given to the process where parties in a dispute come to a compromise (or settle their dispute) without going to court.

Assignment 2.9 a)Alternative Dispute Resolution (ADR) is the name given to the process where parties in a dispute come to a compromise (or settle their dispute) without going to court. The main reason people use ADR is to save the expense of using the courts and solicitors. There are four types of ADR mediation, negotiation, conciliation and arbitration. Negotiation is the simplest form of ADR. Where two people have a dispute they can negotiate a solution themselves. The advantages to the parties involved are that it is completely private and it's fast and cheap. This is where parties to a dispute cannot settle it themselves they may instruct solicitors who will negotiate on their behalf. Even when negotiation fails at these early stages of a dispute and court proceedings start, solicitors will usually continue to negotiate on their client's behalf. This results in many cases being settled out of court. Mediation is where a neutral person (the mediator) helps the parties to reach a compromise. The job of the mediator is to consult with each party and see how much common ground there is between them. S/he should act as a facilitator, taking offers between the parties. The mediator doesn't offer an opinion. Mediation is most suitable where there is some chance that the parties will co-operate. ...read more.

The desire for vindication and public acknowledgement of a wrong suffered can be very strong. The settlement rates of cases going for mediation have also dropped dramatically. This could be due to half hearted attempts to comply with mediation for fear of being judged unreasonably for not considering mediation. To increase the demand for ADR new rules under the Legal Aid scheme stated that an application for legal aid for representation may be refused if there are ADR options which ought to be tried first. The government has also stated that it would attempt to resolve all disputes involving government departments through ADR wherever possible. b) Lord Woolf , assess to justice(final report ,July 19696),identified a number of principles which the justice system should meet in order to ensure assess to justice. the system be just in results it delivers; be fair in the way it treats litigants ; offer appropriate procedures at reasonable costs ; deal with case at responsible speed ; be understandable to those who use it ; be responsive to the needs of who used it; provide as much certainty as the nature of the particular case allows and be effective; adequately resourced and organised. The problems three main problem that were in the justice system was that that the cost were too expensive as often the costs exceeded the value of the claim .The dealy that there was to bringing a case to a conclusion and the complexity of the cases Judicial Case Management (JCM) ...read more.

The courts acts as umpire taking a hands off approach in the matter of hand so long as the complex boxing ring procedures are followed. The complex procedures involved meant time and costs which are unsustainable to private individuals and small companies which meant that the Rule of Law is unfavourably balanced on the side of the party with expenses to worry about The reforms were implemented in the Civil Procedure Rules implemented in April 1999 and the courts were given power to order parties to attempt mediation failing which the courts could impose cost penalties or cost sanctions on the winning party. This was put into practice in cases such as Dunnet v Railtrack plc where it was stated that if a party rejected ADR out of hand, they would suffer the consequences of a discretionary order. In Halsey v Milton Keynes General NHS Trust it was added that members of the legal profession should routinely consider with their clients whether their disputes are suitable for ADR. Moving towards a more inquisitorial system in which the judge would take a more investigative role and the two parties would be required t cooperate by revealing all the evidence to each other. Reducing the time and costs factor by cutting down on the number of cases that eventually go to court with greater use and legitimacy of the ADR process. This would mean making it compulsory for selected cases to solve their disputes via this route. ...read more.

Summary: an accurate outline of forms of ADR and discussion of their advantages and disadvantages; followed by an effective consideration of the Woolf reforms to civil courts.
Rating: *****