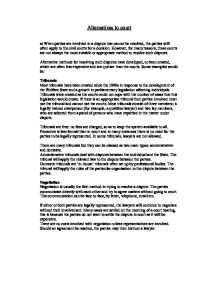 Alternative dispute resolution. Alternative methods for resolving such disputes have developed, or been created, which are often less expensive and are quicker than the courts.

Alternatives to court a) When parties are involved in a dispute that cannot be resolved, the parties will often apply to the civil courts for a decision. However, for many reasons, these courts are not always the most suitable or appropriate method to resolve such disputes. Alternative methods for resolving such disputes have developed, or been created, which are often less expensive and are quicker than the courts. Some examples would be: Tribunals Most tribunals have been created since the 1940s in response to the development of the Welfare State and a growth in parliamentary legislation affecting individuals. Tribunals were created as the courts could not cope with the number of cases that this legislation would create. If there is an appropriate tribunal then parties involved must use the tribunal and cannot use the courts. Most tribunals consist of three members; a legally trained chairperson (for example, a qualified lawyer) and two lay members, who are selected from a panel of persons who have expertise in the matter under dispute. Tribunals are free: no fees are charged, so as to keep the system available to all. ...read more.

Should an agreement be reached, the parties may then instruct a lawyer. Arbitration Arbitration is where the parties refer the dispute to a third party, who will act like a judge and give a decision on the dispute, which is called an award. The arbitrator will usually be a person with both legal and specialist knowledge in the subject matter of the dispute. Arbitration is covered by the Arbitration Act 1996. The arbitration agreement must usually be in writing, but how the arbitration proceeds is open to the parties to agree. The parties may have included an arbitration clause in their original contract, committing them to arbitration in the even of a dispute, known as the Scott v Avery clause. The process of arbitration is free, but the arbitrator will charge a fee. The parties are allowed to be represented by a lawyer if they wish, but this is not encouraged. b) Advantages and disadvantages of ADR There are many advantages of using alternative methods to court. The main advantages, which are also the main reason people use ADR as appose to the courts are the cost and speed. ...read more.

However, there are also some disadvantages of using alternative methods to the courts. In some methods there could be a lack of legal expertise, for example in mediation; when the result of a dispute involves a difficult or complicated point of law, the mediator may not have the ability to deal with the mediation in an appropriate manner. Some methods, unless the parties agree otherwise are not binding, and the parties cannot enforce the agreement in the courts. Tribunals and arbitrators are not bound by the rules of judicial precedent. Tribunals are not bound by the strict rules of evidence either. As a result, tribunal decisions will sometimes be inconsistent, which creates uncertainty for future cases. As with arbitration, each case is judged on its own merits, providing no real guidelines for future disputes. This leads to inconsistent decisions and conclusions. Because of the lack of publicity for tribunals, cases of public importance are not given the attention and consideration they deserve. There is limited right to appeal. In tribunals there are different rights and routes of appeal from different tribunals which may make the process complicated. However, all tribunal decisions may be reviewed by the High Court under the principle of judicial review. ...read more.