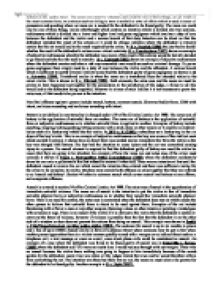 Any crime in law is made up of two elements, the actus reus which is defined as the 'guilty act' and the mens rea defined as the 'guilty mind'. The actus reus must be voluntary and could be one of three things, an act which is the most common form, an omission such as failing to wear a seatbelt or state of affairs which is used in cases of possession and speeding where no mens rea is needed for the defendant to be found guilty. The mens rea could also be one of three things, malice afterthought which centres on intention which is divided into two sections, recklessness which is divided into a lower and higher level and gross negligence which involves a duty of care between the defendant and the victim and a serious breach of that duty. Intention can be direct so that the defendant intended the result of his actions or it could be oblique intention where the defendant is virtually certain that his act would lead to the result required by the crime. In R v. Nedrick (1986) the jury had to decide whether the result of the defendant's actions was a virtual certainty. ...read more.

Chief Superintendent, working police station (1983). The sentence for assault is up to six months in prison and a fine of up to �5000. Assault can be in form of a physical threat where someone may be put in fear when another person approaches them in a violent manner possibly armed with a weapon or an indirect threat such as a telephone call, a text message or even an e-mail, even silent phone calls could be considered as assault. An example of a case where the defendant was failed to be found guilty of assault was in Tuberville v. Savage (1669) where the defendant said 'If it were not assist time I would run you through with my weapon. There was no assault because the victim knew nothing was going to happen to him immediately because of the words spoken by the defendant, assize time was when all the judges visited the town and he would therefore refrain from committing the act. The intention was there but there was no act, the mens rea must exist or be proven for the defendant to be found guilty. ...read more.