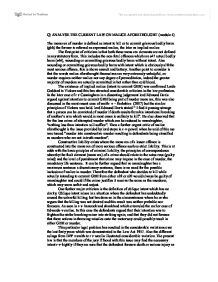 Q) ANALYSE THE CURRENT LAW ON MALICE AFORETHOUGHT (module 4) The mens rea of murder is defined as intent to kill or to commit grievous bodily harm (gbh) the former is referred as expressed malice, the later as implied malice The first point of criticism is that both these mens rea elements are not defined in any statutory form. This includes the non-fatal offences which are s47 actual bodily harm (s46), wounding or committing grievous bodily harm without intent. Also wounding or committing grievous bodily harm with intent which is obviously s18 the most serious offence, this is above assault and battery. Another point to consider is that the words malice aforethought themselves are very extremely unhelpful, as murder requires neither malice nor any degree of premeditation, indeed the greater majority of murders are actually committed in hot rather than cold blood. The existence of implied malice (intent to commit GBH) was confirmed Lords Goddard in Vickers and this has attracted considerable criticism in the law profession. ...read more.

This is at odds with the basic priciples of criminal liability, the principles of correspondence whereby the fault element (mens rea) of a crime should relate to the actus reus (guilty mind) and the level of punishment that crime may impose in the case of murder, the mandatory life sentence. It can be further argued that as manslaughter has a maximum sentence a discretionary sentence, there is no need for the possible inclusion of malice in murder. Therefore the defendant who decides to kill while actually intending to commit GBH from either s18 or s20 would always be guilty of manslaughter and could if the crime justifies it receive the same as the murderer, which may seem unfair and unjust. One further major criticism is the definition of oblique intent which has no clarity. Oblique intent arises in a situation where the defendant has undoubtedly caused the unlawful killing, but has done so in the circumstances where he or she argues that the killing was not desired and this result was neither probable nor foreseen. ...read more.

This means that the jury could decide that a defendant charged with the offence of murder did foresee death or GBH as virtually certain, but still decides that the defendant did not intend to kill or commit GBH. This position would be unsatisfactory in relation to any offence, for murder, with its own unique mandatory life sentence, it is far more objectionable. Finally given the judicial decisions in r-v-savage s.47 and r-v mowatt s.20, it is clear that these two offences now involve constrictive liablility for the mens rea of murder malice forethought. For neither of theses offences does the crown prosecution have to prove intention or recklessness as to the actus reus of the offence of murder. This seem illogical and needs to be reformed, and this was looked at in 1994 law commission recommendation for murder. Furthermore although these recommendations have been accepted by all subsequently governments, no action has been taken to incorporate them in any of the major criminal justice acts passed since 1994. ...read more.