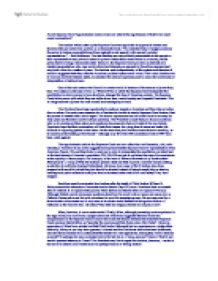 Are all Supreme Court Appointments controversial and what is the significance of Bush's two most recent nominations? The Justices which make up the Supreme Court are appointed as opposed to elected and therefore they are called into question as a democratic body. "An unelected body of judges possesses the power to declare unconstitutional those legislative acts passed by the people's elected representatives." - Bob McKeever. The fact that they are not politically accountable to the people or their representatives and yet hold extensive powers makes them controversial in a country, which prides itself on being a democratic state. However, the Supreme Court provides an alternative to elected representatives who may work in their best interests, as opposed to those they represent and only hold office for a matter of years. The Justices work independently of this system and therefore it could be suggested that they make the American political system more varied. ...read more.

The President is most likely to choose somebody who is of a similar political nature and somebody he personally feels will uphold his own beliefs. Presidents hope that their nomination will back their causes for a long time to come and make life difficult for opposing parties in the future. At the same time, the President must choose a carefully, as he must have the backing of the Senate - although only 28 of the 148 nominations before 1999 have been voted against. The appointments made to the Supreme Court are more often than not Caucasian, rich, male Christians. Therefore it can not be suggested at any time that the Supreme Court is representative of the American People. This political body is made up in order to interpretate the constitution on behalf and in the best interest of America's population 295,734,134 and yet do not share the same life experiences as the majority of these people. ...read more.

He claims "My faith and religious beliefs do not play a role". Miers, however, is more controversial. Firstly, Miers, although possessing much experience in the legal world, has never been a judge before and it has been suggested that she will be too inexperienced on the Supreme Court. Conservative activist Manuel Miranda has described Supreme Court nominee Harriet Miers as "possibly the most unqualified choice since Abe Fortas". However, supporters of Miers have pointed out that Chief Justice Rehnquist had no experience as a judge either. Secondly, Miers, as you may have guessed, is female and the Presidents choice has been questioned; was she chosen because it is unlikely that the Senate will vote against her, fearing they will be deemed as s****t? Or perhaps she was nominated due to the fact she is a 'close, personal' friend of Bush's and was his personal attorney in Texas? The President may live to regret his decision, however, - as she is known to be liberal in her beliefs and will perhaps become a 'Swing Justice'. ...read more.