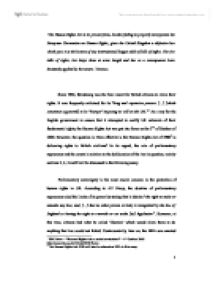 As a way for the English government to ensure that it attempted to certify UK nationals of their fundamental rights, the Human Rights Act was put into force on the 2nd of October of 2000

'The Human Rights Act in its present form, besides failing to properly incorporate the European Convention on Human Rights, gives the United Kingdom a defective law which puts it at the bottom of any international league table of bills of rights. The Act talks of rights, but keeps them at arms length and has as a consequence been hesitantly applied by the courts.' Discuss. Since 1966, Strasbourg was the final resort for British citizens to claim their rights. It was frequently criticised for its "long and expensive process [...] [which sometimes appeared] to be "Europe" imposing its will on the UK."1 As a way for the English government to ensure that it attempted to certify UK nationals of their fundamental rights, the Human Rights Act was put into force on the 2nd of October of 2000. However, the question is: How effective is the Human Rights Act of 19982 in delivering rights to British civilians? In its regard, the role of parliamentary supremacy and the courts in relation to the deficiencies of the Act in question, mainly sections 3, 4, 6 and 8 will be discussed in the following essay. Parliamentary sovereignty is the most crucial concern in the protection of human rights in UK. According to AV Dicey, the doctrine of parliamentary supremacy ruled the limits of its power by stating that it obtains "the right to make or unmake any law; and, [...] that no other person or body is recognized by the law of England as having the right to override or set aside [its] legislation". However, at this time, citizens had what its called 'liberties' which would allow them to do anything that law would not forbid. ...read more.

Furthermore, there is no express obligation upon courts to provide effective remedies which can occasionally leave applicants without one. Nonetheless, it is seen that at present, litigants are being granted successful remedies, which would be due to the court's attitude on "interpret[ing the act] in a broad and generous way to give effect to fundamental rights."18 As a result, although the act does not provide good clauses on remedies, the outcome of it is fairly successfully with the intention of protecting "an important constitutional instrument"19. With the principle of providing 'just satisfaction', damages can also be seen as deficient under the Act. Damages are not granted by all courts, they are very rare indeed and limited according to other remedies allowed. Besides, section 9 of the Act restricts the judiciary to award damages in criminal proceedings. However, if the judiciary provides damages, it comprises the possibility to award them on pecuniary (e.g. financial loss) and non-pecuniary loss (psychological distress). Moreover, if a litigant took his/her case to all courts and has not yet found an effective remedy, there is a possibility to apply to the European Court of Human Rights, which again is showing that the Act is inefficient. The role of British courts in this topic is incorporated in the traditional structure of the supremacy of parliament, in which its "sole power [...] is to decide and enforce what is the law and not what it should be"20 Furthermore, it is also seen how section 3 invites the courts to interpret statute in a best convention-compatible way that it could lead courts to interpret the meaning that Parliament wanted to give the ruling, which would revise it and not just interpret it as Lord Nicholls says in In Re S21. ...read more.