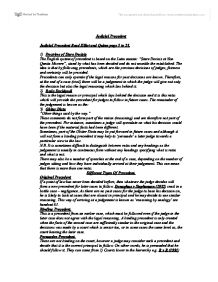 Judicial Precedent Judicial Precedent Read Elliot and Quinn page 5 to 23. 1) Doctrine of Stare Decisis The English system of precedent is based on the Latin maxim: "Stare Decisis et Non Queita Movere", stand by what has been decided and do not unsettle the established. The idea is that by following precedents, which are the previous decisions of judges, fairness and certainty will be provided. Precedents can only operate if the legal reasons for past decisions are known. Therefore, at the end of a case (civil) there will be a judgement in which the judge will give not only the decision but also the legal reasoning which lies behind it. 2) Ratio Decidendi This is the legal reason or principal which lays behind the decision and it is this ratio which will provide the precedent for judges to follow in future cases. The remainder of the judgement is known as the: 3) Obiter Dicta "Other things said by the way." These comments do not form part of the ration (reasoning) and are therefore not part of the precedent. For instance, sometimes a judge will speculate on what his decision would have been if the material facts had been different. Sometimes, part of the Obiter Dicta may be put forward in future cases and although it will not form a binding precedent it may help to 'persuade' a later judge towards a particular view in the law. N.B. It is sometimes difficult to distinguish between ratio and any headings as the judgement is usually in continuous form without any headings specifying what is ratio and what is not. There may also be a number of speeches at the end of a case, depending on the number of judges sitting and how they have individually arrived at their judgement. This can mean that there is more than one ratio. Different Types Of Precedent. Original Precedent If a point of law has never been decided before, then whatever the judge decides will form a new precedent for later cases to follow. ...read more.

However this decision became increasingly unsatisfactory as the law could not alter to meet changing social conditions, nor could it alter to change wrong decisions expect per incuriam ones, except by passing a new act of Parliament DPP v Smith (1961). The Lords had ruled that intention could be judged objectively. This was out of line with previous common law and held to be wrong however it took a statute to change this ruling:1967 Criminal Justice Act. Because of the problems being caused by the House Of Lords voluntary abdication of it's power to change it's own decisions and particularly because of criticism caused by Smith. In 1966 Lord Gardener the Lord Chancellor issued a Practice Statement. Initially the Lords were reluctant to use this new power, but since the 1970's it has been much more willing to apply it in both criminal and civil law. Economic loss in the law of Negligence. This was an important decision because Anns's had led to considerable complexity and uncertainty in the law. In the criminal law where the liberty and reputation of the subject is at stake the Lords has also been willing to over-rule itself. In one case only a year after the previous decision. - Shivpuri (1986) over-ruled Anderton v Ryan (1985) Court of Appeal and the Doctrine Of Precedent. Civil Division. The Court of Appeal is bound to follow it's own previous decisions. There are only three exceptions to this rule and these exceptions were identified in Young v Bristol Aeroplane Company (1944) The case involved the workman's appeal against a High Court decision, barring him from claiming damages after he had already accepted compensation under the 1925 Workman's Act. The appeal judges in deciding that they could not hold up the appeal emphasized the only circumstances under which the appeal court could overturn one of it's own previous decisions. These are: a) ...read more.

5) Case law of real situations - viable statute law and therefore rule and principles are derived from everyday life. This means that it should work effectively and be intelligible. Where unwelcome developments take place e.g. Negligence over Ann's - the Lords can correct the position using the 1966 Practice Statement. 6) The law can develop. There is flexibility especially since 1966. Look at the law on intention has changed since 1970, but also when Lords feel that change is leading to uncertainty again, as in Woolin: 1998 it can use it's power to reinforce the rule - Nedrick 1986. 7) Saves time - avoids unnecessary litigation. Disadvantages. 1) There are so many cases that it is hard for judges to find relevant cases and the reasoning may not be clear. 2) Case law can only change if a real case is brought. This requires someone to have the money (or the access to legal aid) to bring such a case. To take a case to the Lords is highly expensive. 3) Bad decisions are perpetuated since lower courts must follow higher courts (e.g. Anns) Very few cases get to the Lords which is the only court which can overrule one of it's own previous decisions. Not until 1991 (n R v R) was r**e in marriage accepted as a crime. 4) Restricts the development of the law. It leads to distinguishing and hair splitting decisions which rules the law unnecessarily complex e.g. the law on automatism and voluntary intoxication which has led to some diabetics having to use the defence of insanity to escape a conviction if their trance like state was caused by lack of insulin, whilst if their state was caused by failure to eat after taking insulin they can use the defence of automatism. The law on insanity is still based on the McLoughlin rules 1843. 5) It is difficult to distinguish between ratio and obiter e.g. Donoghue v Stephenson. 6) Too much distinguishing or use of Practice Statement damages certainty. ...read more.