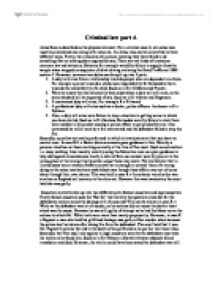 Criminal law part A Actus Reas is described as the physical element. For a criminal case to win actus reas must be proved and also along with mens rea. An Actus reas can be committed in three different ways. Firstly, the omissions of a person meaning they have failed to do something that an existing duty required by you. There are two kinds of omissions common law and statutory. Statutory for example would be failure to supply a breathe sample when stopped on suspicion of drink driving violating the Road Traffic act 1988 section 2. However, common law duties can be split up into 5 parts. 1. A duty will arise from a relationship towards people who are dependent on others. For example a parent towards a child owes responsibility for foreseeable harm towards the vulnerability of a child. Such as in R v Gibbons and Proctor. 2. Were by a duty that has voluntarily been undertaken a duty will still exist, as the same standard will be expected of you. Such as in R v Stone and Daganson. 3. A contractual duty will arise. For example R v Pittwood 4. A professional duty will arise such as a doctor, police officers. As shown in R v Dytham. ...read more.

Also, actions by a third party can amount to a novus actus intervenes. However for medical treatment to amount to a novus actus intervenes after a criminal assult has occurred it must be serious. For example in the cases R v Chesire and R v Jordon. Firstly, In R v Chesire it was held not the doctors were not liable when later on the patient died from a traciostimy after being shot in the leg. However, Secondly In R v jordon the courts held the doctors were liable as a different doctor had given the patient antibiotics which the hospital found out earlier that he was allergic to them. Mens rea is the term used to describe the mind in which the defendant had when committing the crime. A criminal mind must be proven. There are two blameworthy states of mind. The most blameworthy being intention. In the serious crimes such as murder this must be proven beyond reasonable dought that there was intention. The first of this is direct intent, this is by the defendants aim or purpose is to intentionally bring any unlawful consequences.This was first established in the case of Mohan were the court said 'intedintion is a decision to about, in so far as it lies within the accused's power , no matter whether the acues desired that consequence of his act or not' ...read more.

This is were the mens rea of the case meets the actus reus for the first time as Alan now has the intention to keep his lorry there causing more and more serious harm to Denis the longer it is there for even though Alan never set out to cause this damage failure to undo the actions he caused unknowingly amounts to sufficient mens rea for the crime. This specific scenario can be contrasted with Fagon v Chief Commissioner of the Metropolitan Police as Fagon park on the policemans foot there has been no mens rea therefore no crime committed but however after Fagon refuses to move the car from the Policemans foot then the mens rea has occurred and meet the actus reus. Although Fagon can be contrasted with this case the seriousness of the injuries in which Denis has received due to the consequences of Alan not removing the car when realizing what had happened should be taken into account. Due to the seriousness of the injuries inflicted and the dismissal of not wanted to move the car when the victim was in substantial pain either a section 20 or section 47 should apply here. A section 20 could apply as the seriousness of the injuries were by Denis suffered a fractured spine and was permanently paralysed and also the failure to move the lorry when Denis was noticed to be trapped means the crime should be taken far more seriously. ...read more.