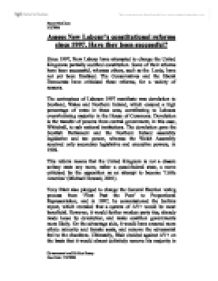 Assess New Labour's constitutional reforms since 1997. Have they been successful?

Assess New Labour's constitutional reforms since 1997. Have they been successful? Since 1997, New Labour have attempted to change the United Kingdoms partially codified constitution. Some of their reforms have been successful, whereas others, such as the Lords, have not yet been finalised. The Conservatives and the liberal Democrats have criticised these reforms, for a variety of reasons. The centrepiece of Labours 1997 manifesto was devolution to Scotland, Wales and Northern Ireland, which ensured a high percentage of votes in these area, contributing to Labours overwhelming majority in the House of Commons. Devolution is the transfer of powers from central government, in this case, Whitehall, to sub national institutions. The devolution gave the Scottish Parliament and the Northern Ireland assembly legislative and tax power, whereas the Welsh Assembly received only secondary legislative and executive powers, in 1998. This reform means that the United Kingdom is not a classic unitary state any more, rather a quasi-federal state, a move criticised by the opposition as an attempt to become 'Little America' (Michael Howard, 2001). ...read more.

Under the Human Rights Act, the UK's courts of law now have the power to hear cases on these rights, whereas before the Act, citizen had to go to Strasbourg. However, should a court find a piece of EU legislation not compatible with the Human Rights Act, they cannot overturn it, only suggest to Parliament to amend it as fast as possible.. In general, the opposition approve of this reform, although they feel it was not radical enough, by not restricting the executives power, and that the judges are not accountable for their judicial decisions. Labour had also pledged to introduce a Freedom of Information Act, and a white Paper was drafted in 1997. It requires public bodies to publish all information, excluding that which can be held on the basis of national security and public safety. However, citizens do not have an automatic right to see this information; it is only granted at the government's discretion. Another reform of Blair's was the House of Lords Act, in which he removed all bar 92 of the hereditary peers, replaced by elected officials. ...read more.

This reform has now been progressed to multiple other cities, including Hartlepool, Middlesbrough and Watford. After an independent body revealed that 93% of the UK believed that the British government was corrupt as a whole, after the Tories took a �450,000 donation from a fraudster, and the Labour party exempted Formula 1 from the ban on tobacco advertising after a �1 million bribe, Blair decided that there was a need for state funding of parties in order to bring a halt to the corruption of the political world. However, at the present time, nothing has been made in this direction. In conclusion, the reforms under Blair have been mixed in their success. Whilst devolution, the Human Rights Act, and the Freedom of Information Act have proved widely popular, the House of Lords and the Regional Assembly proposal are still to be completed. Others, such as the reform of the voting system, and party funding have yet to get under way, if, indeed, they ever will. ?? ?? ?? ?? Beccy McClure 3/2/2006 Government and Politics Essay Due Date: 7/2/2006 ...read more.