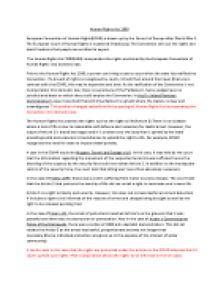 Assess the impact of the introduction of the Human Rights Act 1998 on the rights of an individual in the UK.

HRA incorporation allows the rights to be enforced in the UK cases. Human Rights Act incorporates the Convention into domestic law which strengthens the protection given to individuals and provides improved remedies if rights are violated. If rights are violated, individuals can apply directly to the UK courts and do not have to go all the way to Strasbourg. S.2 HRA 1998 states that domestic judiciary must take into account the Convention as relevant to the case although it is not bound by it. The UK Courts have to interpret all legislation in a way which is compatible with the Convention rights ?so far it is possible to do so?. This is much further than just allowing ambiguities to be interpreted in favour of the Convention. However it is a weak obligation as courts are not bound to follow but it is still better than before as courts do not even need to consider the Convention. Section 2 does not give much impact on English law as it is not binding, but may be more impactful if it is. S.3 HRA 1998 requires the primary and secondary legislation, whenever enacted, to be interpreted and applied in a manner which is consistent with the Convention. ...read more.

s.7 states that only the victim of the unlawful act may bring proceedings against public authority. If it has been recognised that the public authority has acted unlawfully, relief may be granted under s.8. This further protects individuals as it deters public authority to act unlawfully. However, it is only limited to a range of people and is stricter than sufficient interest test. Pressure groups cannot bring issues to courts as they are not considered ?victims? under HRA. Article 15 states that a state member can derogate from ECHR in the time of war and emergency. However a notice must be given by the Secretary General. This does not enforce the ECHR hence does not protect individual rights. Advantages of HRA is that it can be heard domestically so people can be more aware of their rights compared to matters heard in Strasbourg. More people will be willing to bring matters to court and thus strengthens human rights. Also, UK courts have developed knowledge of its provisions as the decisions have been challenged in Strasbourg. Hence incorporation of tried and tested rights in the domestic law will be easier. However, there is no impact where derogations are used under Art 15 when ministers depart from ECHR in times of emergencies. HRA has much beneficial impact however it cannot enjoy greater impact unless human rights are entrenched and parliamentary sovereignty forgone to enforce ECHR. ...read more.