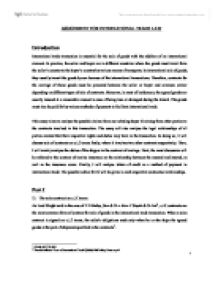 ASSIGHMENT FOR INTERNATIONAL TRADE LAW Introduction International trade transaction is essential for the sale of goods with the addition of an international element. In practice, the seller and buyer are in different countries where the goods must travel from the seller's country to the buyer's country by various means of transports. In international sale of goods, they usually transit the goods by sea because of the international transactions. Therefore, contracts for the carriage of those goods must be procured between the seller or buyer and common carrier depending on different types of sale of contracts. Moreover, in most of incidences, the agreed goods are usually insured at a reasonable amount in case of being loss or damaged during the transit. The goods must also be paid for by various methods of payment to facilitate international trade. This essay aims to analyse the possible claims from our advising buyer G arising from other parties to the contracts involved in this transaction. The essay will also analyse the legal relationships of all parties created that their respective rights and duties may have in the transaction. In doing so, it will discuss sale of contracts on c.i.f. terms firstly, where it involves two other contracts respectively. Then, I will mainly analyse the duties of the shipper in the contract of carriage. Next, the most discussion will be referred to the contract of marine insurance on the relationship between the assured and insured, as well as the insurance cover. Finally, I will analyse letters of credit as a method of payment in international trade. The possible advice for G will be given in each respective contractual relationships. Part I 1) The sales contract on c.i.f. terms As Lord Wright said in the case of T D Bailey, Son & Co v Ross T Smyth & Co Ltd1, c.i.f. contracts are the most common form of contract for sale of goods in the international trade transaction. ...read more.

exercise its right to terminate the contract.29 The House of Lord relied on these authorities in a recent case of The Star Sea30. helding that the duty of disclose all material information to the insurer is the positive duty on the assured to the risk proposed in the pre-contract stage. Thus, the insurer is not allowed to rescind the contract by reason of the post-contract failure to disclose all facts which the insurer might have interest in knowing and might affect his conduct. 3) Insurance Cargo Clause (hereafter referred to as ICC)31 Insurance Cargo Clause provides standard terms on which an insurance cover may be obtained for the carriage of goods. There are three sets of cargo clauses (A, B, C), which defines risks covered and the exclusion of the losses. ICC (A) covers for all risks of loss or damage to the insured subject-matter subject to the various exclusion clauses32Although the insurance is termed to covers so-called 'all risks', it does not mean that every thing which may cause the losses of damages to the insured subject matter and not fall with the exclusions is a risk that the assured is entitled to cover. As an indemnity contract, only loss or damage caused by a risk or things which are not certain to happen will be covered, in other words, it is a fortuitous event, not a certainty33. The certainty or fortuity of losses is one of the limitations for 'all risk' covered. What is certainty or fortuitous must be tested from the assured's standpoint34 if he is aware of the loss at the outset will happen as a matter of course, which renders the loss a certainty. Thus, where the loss or damage is caused by the inherent defect or vice of the goods themselves, the law treats this as a certainty35.A second limitation is found in the ICC (A) themselves under Clause 4,5,6 and 7, which are risks or perils the insurer will not cover generally. ...read more.